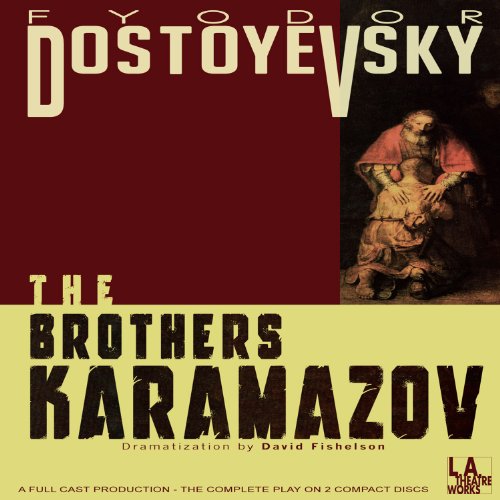 L.A. Theatre Works puts on a spellbinding performance under the direction of David Fishelson in this modern adaptation of Dostoyevsky's influential tome The Brothers Karamazov. The recording features nuanced, live performances from a talented cast of Hollywood actors like John de Lancie, Sharron Gless, Arye Gross, and Harry Hamlin, whose American accents serve to give this classic Russian story a contemporary feel. Listeners will find much philosophical and psychological fodder in this story of a libertine father who takes pleasure in pitting his three sons against one another.

The passionate Karamazov brothers spring to life, led by their lecherous father, who entertains himself by drinking, womanizing, and pitting his three sons against each other. The men have plenty to fight over, including the alluring Grushenka.

What listeners say about The Brothers Karamazov (Dramatized)

A dramatization of the original novel

What disappointed you about The Brothers Karamazov (Dramatized)?

Too fast, skipped over details

Would you ever listen to anything by Fyodor Dostoyevsky again?

If you could play editor, what scene or scenes would you have cut from The Brothers Karamazov (Dramatized)?

Stick with the original version. This is a waste of money