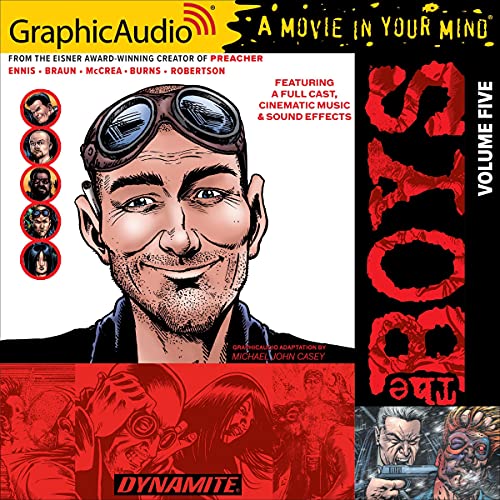 Butcher's full vendetta is revealed as is Vought-American's part in the events on 9/11. Gregg Mallory tells Hughie the history of the Boys and Hughie later confesses his real identity to Annie, Hughie returns to the fold as he and Butcher investigate a murder that may involve Jack from Jupiter. Butcher then returns to London to view the body of his deceased father and Butcher's full back-story as a one-man reckoning is revealed.

What listeners say about The Boys: Volume 5 [Dramatized Adaptation]

I always call these stories movies because they are so vivid and entertaining. The narrator is used for several voices but that doesn’t make the listening messy or confusing. I wish I had more time with The Boys!

didn't want it to end

fun story I didn't want to story listening to! can't wait for the next volume.