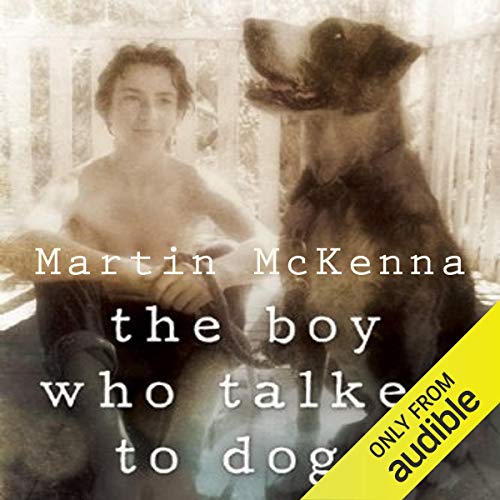 The Boy Who Talked to Dogs

When Martin McKenna was growing up in Garryowen, Ireland, in the 1970s, he felt the whole world knew him as just "that stupid boy". Badly misunderstood by his family and teachers, Martin escaped from endless bullying by running away from home and eventually adopting or being adopted by six street dogs. Camping out in barns, escaping from farmers, and learning to fend for himself by caring for his new friends, Martin discovered a different kind of language, strict laws of behavior, and strange customs that defined the world of dogs. More importantly, his canine companions helped him understand the vital importance of family, courage, and self-respect and that he wasn’t stupid after all. Their lessons helped Martin make a name for himself as the "Dog Man" in Australia, where he now lives and dispenses his hard-earned wisdom to dog owners who are sometimes baffled by what their four-legged friends are trying to tell them.

An emotional and poignant story seasoned with plenty of Frank McCourt style humor, The Boy Who Talked to Dogs is an inspiration to anyone who’s ever been told he or she won’t amount to anything. It’s also a unique, fascinating look into canine behavior. In these pages, Martin shows how modern life has conditioned dogs to act around humans, in some ways helpful, but in other ways unnatural to their true instincts, and how he has benefited enormously from learning to talk dog.

What listeners say about The Boy Who Talked to Dogs

Martin IS "My...Saving Grace"...because he Endured, & Rose above by LEARNING (in a way that No others have -*& THEN sharing with the World a 'Different Understanding' of Dog communications & interactions....he's- Not a "Dog Whisperer", -Not a 'Dog trainer', - Not a 'Dog Psychologist' or 'Dog Behaviorist'...even...he is Truly (Dreadlock) "Dogman" ...relating in a Dogs world, thru 🐕 perspectives, He taught how to Stop "Humanizing" them by communicating on their level, with THEIR natural language...relating, Understanding, instead of trying to get them to do or be, what we THINK, they should be or what we WANT them to be...he "CHANGES.....EVERYTHING" about the way we SHOULD LOVE our dogs, how to be a good stable force in their lives, & how to be a part of their lives in a way that THEY can (and WANT to) be a part of our lives. He's taught me how to be of Value 2 my dogs, & help promote a TRULY NEXT LEVEL RELATIONSHIP with them.
I'm ever indebted, & believe THE WORLD WOULD BE A BETTER PLACE FOR ALL LIVING BEINGS, if we JUST STOPPED trying to Control & dominate everything ALWAYS...& INSTEAD if WE forge a "Symbiotic Relationship"......only THEN <🙏 WILL WE ALL WIN 🙏>
💥🔥💥❣ TY ! 😃😇

Wonderful story with insight to dog behavior and the cruelty of ignorant people toward animals and humans.

What made the experience of listening to The Boy Who Talked to Dogs the most enjoyable?

Both the story and the performance were wonderful.

What was one of the most memorable moments of The Boy Who Talked to Dogs?

The entire book was mesmerizing. The boy was a survivor.

Yes. It was hard to put this book down.

I thought of my son when reading this. His struggles, my own, the ripple effects we, and others have on society. Effects that can be so inspiring, so damaging, and so permanent. This book was extremely well narrated. Very easy to follow. The story itself is great food for thought, especially in these COVID times. I've always felt that if I've helped or positively affected a change to one person in my line of work, then I've done my job. I believe I have, hopefully more than once. I believe this book will also do the same.

the story illustrates how far the medical profession has come in diagnosing and medicating ADHD.

I learned a lot about dog language. I'm a cat person who newly acquired a dog. The story could have been heartbreaking but was told with gusto and humour.

The flow of the sentences is art. my only regret is that there isn't more. The narrator does an excellent job of making each character come alive. I want more from this author and narrator.

I fell in love with this story but was expecting a fuller ending. Was this a true story? I must research it some!!! The narrator was really great. The story too except for the too soon ending. Is there a sequel? Must find out. Very enjoyable!!!

The Boy Who Talked to Dogs is a treat! Thank you Audible for bringing us this memoir. What could make it even better would be if those who don’t listen to books could get a copy to read. Ah, it then they would miss the wonderful narration.

Another thing that I wish is that Martin McKenna would write a sequel. We only got one year! I want MORE!

Wonderful story of the love and transformative power of dogs

As a dog lover, this story touched me deeply. A beautiful example of the love and acceptance of dogs. They don’t care what others think of you, they just faithfully love their people. I’ve known many people that didn’t have a dog, or had never had a dog and often thought they desperately needed the unconditional love of a dog. This dear boy found out what this kind of love, trust and loyalty is all about.

Growing up in a poor place and learning how rich you actually are.

I loved every moment of that book from beginning to end. I could see and smell and feel the coat of each one of them. I became that Irish boy and found myself crying my heart out as I grew up and left my best friends who taught me everything.