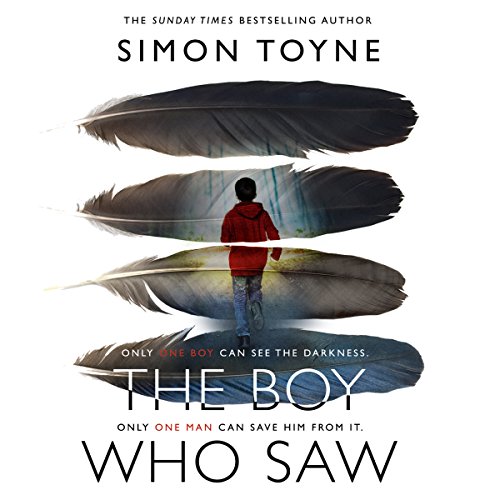 The Boy Who Saw

Only one boy can see the darkness.
Only one man can save him from it.

'Finishing what was begun.'

These are the words written in blood beside the body of an elderly tailor who has been tortured and murdered in the ancient town of Cordes.

He leaves behind a cryptic message for his granddaughter and her son, Leo - one that puts them in immediate danger.

When the mother and child are forced to go on the run, accompanied by the enigmatic Solomon Creed, they find themselves hunted across France, on a journey that will take them into the heart of Europe's violent past.

What begins as small-town murder will become a race to uncover a devastating secret dating from World War II. The few men who know the truth are being killed by a powerful organisation, and only one man stands in its way.

Only Solomon Creed can stop the murders.
Only he can save the boy.

"Simon Toyne is one of my favourites. In Solomon Creed, he's created a hero for the ages. A word of warning: if you have anything else to get done, don't crack open a Toyne thriller." (Gregg Hurwitz, the number one Sunday Times best-selling author of The Nowhere Man)
" The Boy Who Saw is the Pandora's Box of books - once opened it cannot be closed. Toyne's writing brings effortless fluency combined with heart-pounding action. Readers beware...this is a glorious terror of a tale." (Helen Fields)

What listeners say about The Boy Who Saw

Even though I was interested by the storyline, I was somewhat put off by French characters talking in various English accents.

Great story. Found the narrator's English accents for the French characters difficult to warm to.

This book could have been told in less chapters.
To many characters.
Enjoyed first book in the series more.

Yet another Solomon Creed novel - another amthospheric journey created by the skilled wordsmith and the very competent narrator.
The only minus: the story is set in France, with many French characters. Joseph Balderrama is normally fabulous with accents and dialects, so his using British and Scottish accent for reading French people's dialoge sounds somewhat weird - but ok, you get used to that.

A good book made hard to listen by the narration.

The narrator Joseph Balderrama, regularly chooses to actually whisper when a character in the book is whispering. The result being that you then can't hear the narration without having to keep skipping back and adjusting the volume up and down!
Please Simon Toyne, either pay for a more professional narrator, or instruct JB to do what the good narrators do, and just say "...and Solomon whispered keep very still...", whilst maintaining your volume at an audible level!!

I've read the actual books, but loved listening to them too. The narrator is excellent. The story is brilliant, would recommend the series, this is the third.

Brilliantly read again.
The second chapter of Solomon Creed is as good if not better than the book.
Great story line, I was engrossed from the start. Some quiet amusing parts which made me smile, which was nice as the story is quiet dark.
Loved it and can't wait for the third instalment.

Story was enthralling. Solomon is such a unique character. Performance by Balderrama, outstanding. Love!

The Boy Who Saw

A stunning book and extremely addictive!,, cannot wait for the next instalment. A brilliantly written book that keeps you on tenterhooks all the way through. Thank you very much Mr Toyne!

I do not shy away from the horrors of the world, past or present,and believe they are important that we acknowledge this.
But this book is NOT what I anticipated at all.
The main premise of the story keeps going back to the horrors of the “ Death concentration Camps” and the most awful treatment of the Jews .
I could not continue, which is a shame as the “ present “ storyline was very good and intriguing but when it went back in time .., I’m sorry 😞 I just couldn’t keep continuing 😢😢

Excellent Narration now want to read more from this author! Would highly recommend as story flow good and easy to invest in the characters.

After listening to the first book, I couldn’t wait to listen to book two. However, I was bitterly disappointed in the narration.

In book one the narrator took on the characters and their accents (especially the Mexicans), perfectly. Not so book two. All French people sound English, and the police sound like they work for the Sweeney, with almost Cockney accents.

What on Earth is going on? When you have a series of books, the most important thing is continuity. I’m only on book two and the continuity has gone already. I seriously don’t know if I will bother with the rest series.

What made the experience of listening to The Boy Who Saw the most enjoyable?

He spoke quite quietly and monotonously, no real inflectionin his voice. Shame to spoil a good story.