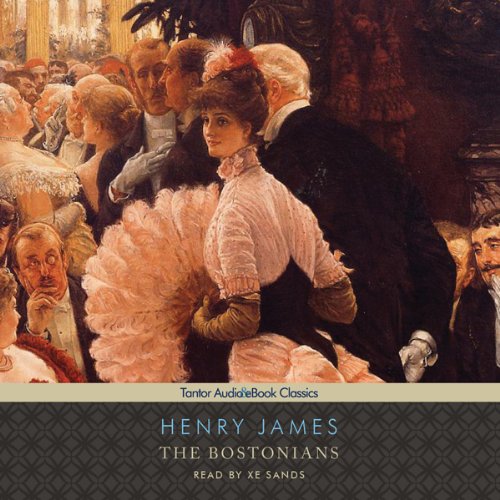 From Boston's social underworld emerges Verena Tarrant, a girl with extraordinary oratorical gifts, which she deploys in tawdry meeting-houses on behalf of "the sisterhood of women." She acquires two admirers of a very different stamp: Olive Chancellor, devotee of radical causes and marked out for tragedy; and Basil Ransom, a veteran of the Civil War who holds rigid views concerning society and women's place therein. Is the lovely, lighthearted Verena made for public movements or private passions? A struggle to possess her, body and soul, develops between Olive and Basil. The exploitation of Verena's unregenerate innocence reflects a society whose moral and cultural values are failing to survive the new dawn of liberalism and democracy.

When it was first published in 1886, The Bostonians was not welcomed by Henry James's fellow countrymen, who failed to appreciate its delicacy and wit. But over a century later, this book is widely regarded as James's finest American fiction and perhaps his comic masterpiece.

What listeners say about The Bostonians

A jaded view of the early suffragist movement

Henry James's Bostonians are two young women, Olive Chancellor who is plain and severe, and beautiful Verena Terrant, a charismatic speaker. Realizing that Verena's speeches will attract audiences feminism, Olive takes her in and cultivates her talent. Unfortunately, Olive and the movement have a rival for Verena's affection -- Basil Ransom, a conservative Mississippian, who wants Verena to become his wife and dedicate herself to his happiness.

I was disappointed in the superficiality with which James presented the feminist movement. Early feminists were often concerned with the hard lives of working class women, who married young to men who were often abusive, and lived in constant struggle. These women had no birth control and bore large families. Their children who were often sickly. Those who did not die young had to leave school early to support themselves. Women often died in childbirth or were left widowed to support large families.

Verena is portrayed as socially naive. She talks in airy abstractions and never seems to connect with the reality of women's lives. Everyone wants to use her: Olive for the movement, her parents to bring them fame and money, and Basil to prove the feminist movement false.

Henry James's books are always about the upper classes, but the human interactions are interesting enough that this usually doesn't bother me. In The Bostonians, however, James's lack of social consciousness bothered me deeply.

i also found the reading to be stilted and stiff.

wow great story. narrator nailed the voices. going to read more of his books for sure.

I really hated this book, and I've never written that in a review before. It was a chore to get through this one. I hung in to the end, because that is my nature, but I was celebrating when it was over. I've read so many Audible books and enjoyed the vast majority. This was among the worst 10%. There is almost no plot, it moves so slowly, and even the characters were shallow. Just not my cup of tea.....

The lady narrating this great novel is reading it as though it is a Peter and Jane book. There is some characterisation but it's not very accurate, all the women sound the same. She over emphasizes certain words which makes the speech wholely unnatural and this, (certainly for me) went a long way to ruining the story and any metaphors or allegories contained within it. Overall it feels as though she had never read the book before making this recording.