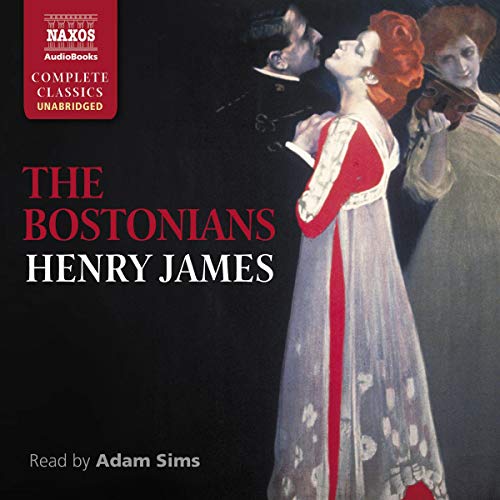 Taking place in Boston, Massachusetts, a decade after the Civil War, The Bostonians tells the story of two cousins who battle for the affections of and control over an enchanting prophetess. While visiting his cousin Olive Chancellor, a fierce feminist deeply involved in the Suffragette movement, Basil Ransom, a Confederate Civil War veteran turned lawyer, attends a speech by the talented young orator Verena Tarrant. Basil quickly falls in love with Verena, although he disagrees with her politics; Olive, however, sees her as the future of the women's rights movement. Will Verena join forces with Olive and fight to further the women's cause, or will she fall for Basil's romantic advances?

What listeners say about The Bostonians

A satire that turns tragic

I had just about given up on Henry James when I stumbled onto this grace note. I've read several of his novels and generally found his characters vapid and his plots nonexistent. But this one.... there's an undercurrent of satiric humor here that I didn't expect. Maybe it's there in the other books and I just didn't see it. It's hard to miss in this one, when the action kicks off with a meeting of Boston “radicals” that turns into a kind of seance coopted by a family of faith healers and charlatans.

There are politics here too, something I never suspected James of having an interest in. These Bostonians are interested in women’s rights, including the vote, in temperance, in abolition — the story takes place not long after the Civil War — and in Reconstruction. One of the main characters is Basil, a former Confederate soldier who has moved to New York to take up a law career. It's a Henry James novel where there actually seems to be an outside world.

Olive Chancellor, a rich young woman, falls in love with an inspired speaker named Verena. The “inspiration” is supposedly literal: Verena waits until she is touched by the spirit and then holds forth extemporaneously on a subject with little prior study. “Love” isn't too strong a word for Olive’s feelings: after a single meeting, she tells Verena that she wants to spend the rest of her life with her. She wants to use her fortune to sponsor Verena’s career and protect her from those who would exploit her and use her as a target for ridicule.

With cold hard cash, Olive separates Verena from her family, and they begin working on a lecture campaign supporting women’s right to vote. Olive will supply the numbers and Verena will supply the passion — which is interesting, because as she herself admits, she feels much less passionate about the cause than Olive does. They spend the winter months studying politics and history: Olive reasons that Verena’s gift will be only more impressive when she can bring actual expertise to bear on the subject. Verena turns out to be an inspired learner as well as speaker. The two women become conscious that the older generation of feminists is fading and that they really are on the cusp of becoming leaders of the movement.

After setting up the political battlefield, James lets a kind of love triangle take over. Basil falls in love with Verena, despite the fact that he thinks her feminist doctrines are mush and poppycock. In his opinion, Fate has a far better destiny in store for her: him. He actually becomes a repellent suitor, the worst kind of male supremacist, whose vision for their future together includes a promise on her part never to utter another word in public. Verena “dislikes” his opinions, but she doesn't hate him, and Olive sees that as a betrayal. And she's right: Basil makes no secret of his rightwing agenda, and how is it possible that Verena doesn't run screaming from his proposal like a sensible young woman? At times his method of courting is hard to distinguish from stalking. It becomes apparent that Verena’s commitment to the Cause was a house built on sand.

In fact, this failure on Verena’s part to reject Basil, when he has trashed and denounced everything she has hitherto believed, is the biggest disappointment of the novel. It's the point on which everything else hinges, and it hurts, because it shows the character of Verena in such an unattractive light. She is able to speak before a crowd with great passion, but in her private life, she is a weak soul desperately looking for someone to guide her. She makes her choice, and James makes it clear, in almost so many words, that it was the wrong one.

With such weighty issues at hand, it's interesting to see the way James avoids preachiness. Every so often one of his characters will deliver up a few paragraphs of heartfelt advocacy. But more often he describes the effect rather than the content of their arguments. He is more interested in the private relationships than the public discourse. I would venture to guess that his private sentiments are more in line with Olive’s than with Basil’s, but he carries the political burden of his story lightly.

This book helped me lose one of my stereotypes about Henry James: the idea that he never breaks the “fourth wall” illusion, that he never addresses the reader directly. He does so repeatedly, at least in this novel: I haven't gone back to look at the others I've read. He does so almost as often as Trollope, who is often cited by Keepers of the Flame as his inferior. What he does NOT do, and which Trollope does often, is confess that his characters are fictions and that his plot is made up. To my way of thinking, that adds to Trollope’s sense of playfulness, but if there's one thing you could never accuse James of, it's being playful.

Adam Sims does a good job narrating the book. He seems to have become Naxos’ go-to narrator for Henry James, and he certainly serves this novel well. He does an especially good job with Basil: it would have been too easy to turn his Southern charm into a caricature, but Sims avoids that trap: in his hands, Basil’s voice is warm and definitely Southern but in no way invites ridicule. He does well with the voices of the many women in the story as well, lending a conviction to their beliefs that Basil is not willing to grant them.