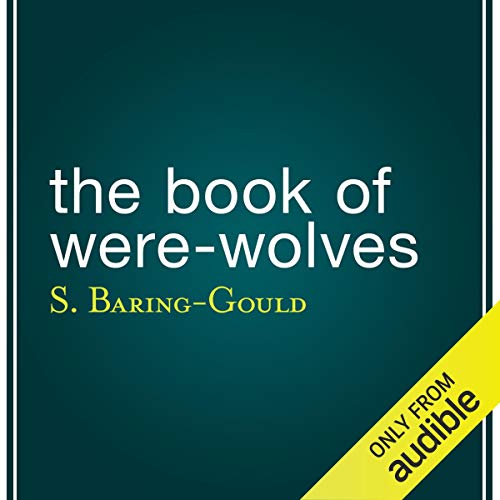 Sabine Baring-Gould, a priest and scholar who wrote, among others, the hymn "Onward Christian Soldiers", also wove this tapestry of anecdotes, mythology, and serious accounts on the existence of werewolves: half-man, half-wolf, fiendish creatures. Bernard Clark performs this audio, affecting the cold sardonic tone of someone who, like the narrator in the introduction, ignores the warnings of frightened villagers, and clutches a stick for defense when he finds himself alone later that same night. Baring-Gould finds no hard evidence for the existence of the beast but the traces he finds through widely varied sites of geography and time will pique the interest of anyone with a taste for the supernatural and unknown.

Lycanthropy is a mysterious subject. Ancient belief in lycanthropy was widespread, and it still exists in parts of the world. Literatures all over the world have tales of men changing to animals. Werewolves are often related to demons, devils, blood, and the full moon. In the Middle Ages the church condemned lycanthropy as a form of sorcery and often ruthlessly punished the supposed offenders. In this classic study, Sabine Baring-Gould, a historian, examines the literature about this matter from a serious perspective.

What listeners say about The Book of Were-Wolves

A great classic of the supernatural, poorly read

Sabine Baring-Gould's Book of Werewolves is a classic of the genre. Along with authors like Montague Summers he was, in his day, an expert on such supernatural phenomena.

However, the book does throw in various words and extracts in French, German, Latin and a whole host of other languages, which unfortunately the reader is not always familiar with and mispronounces on a number of occasions. Even biblical characters like Elias get their names pronounced wrongly.

The audio book has all the hallmarks of a recording made with very little preparation or research. A shame this could have been tremendous, but falls far short of what it should have been.