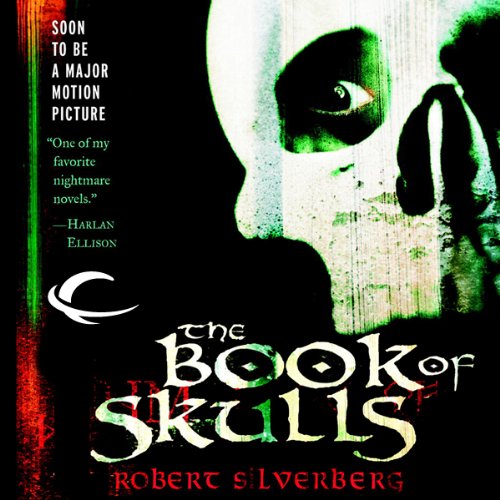 The Book of Skulls

Seeking the immortality promised in an ancient manuscript, The Book of Skulls, four friends, college roommates, go on a spring break trip to Arizona: Eli, the scholar, who found and translated the book; Timothy, scion of an American dynasty, born and bred to lead; Ned, poet and cynic; and Oliver, the brilliant farm boy obsessed with death. Somewhere in the desert lies the House of Skulls, where a mystic brotherhood guards the secret of eternal life.

There, the four aspirants will present themselves - and a horrific price will be demanded. For immortality requires sacrifice. Two victims to balance two survivors. One by suicide, one by murder. Now, beneath the gaze of grinning skulls, the terror begins.

What listeners say about The Book of Skulls

Wow I was realy impressed by this book. My first Silverberg novel, and my first audiobook read by Stefan Rudnicki, and I have to say, I'm definitely not done with either of them.

Rudnicki's performance is excellent, I found his grit and intensity especially suited to this story. As for the story itself, it really is pretty simple, you can read a summary anywhere and it may not sound very interesting, but it is very well done.

However, what brings this book to masterpiece level are the prose and the characters. The prose is never overdone, but always very visual, very insightful. There seem to be a lot of long-ish sentences but you never get distracted; most impressive, through subtle changes in the choice of words and construction of the sentences, you immediately learn to tell from which point of view the story is being told. As for the characters themselves, they also may sound like cliches, but Silverberg develops each of them slowly and carefully until you know more about all of their multiple facets than you may wish to know. Yes, none of them are especially likable, but you can't help being fascinated by all four of them.

I have to say that this has just become one of my very favorite books ever; the narration is outstanding, and I'd recommend it to pretty much everybody who doesn't mind a typical and straightforward book. I read the author's afterword online in which he talks about how hard to classify this book is. I agree, and I think this is one of the main reasons The Book of Skulls isn't better known and recognized. If you go into it expecting a typical SF story you are going to be disappointed. And if you're just expecting a straightforward mainstream narrative you're also going to be disappointed. It was a book written during Silverberg's most experimental and ambitious period, in the midst of the New Wave of SF, and so you have to get into it with an open mind.

(No intentional spoilers, but there is a tease)
The story, while initially captivating is ultimately weak. While I felt some connection with each of the characters, and their relationships with each other, ultimately I was not satisfied with the story, the resolution, or the aftermath. The road trip part of the story was great, but once they arrive at their destination, the storytelling seems to fall apart, random information, of which we have had no clue, is thrown in just to make the plot move forward and doesn’t really make sense, and the prize they fight for doesn’t seem seductive at all, call me Timothy, but at that point I could no longer buy into the plot. It is interesting though the entire time I was wondering “Who will make it? Who will go and how? Will it even be real? “ Ultimately I think the first 3/4 of the book are worth it, and while the 1/4 ending is lacking, you might as well finish it you’ve come this far, and if you don’t finish it... you’ll finish it, you won’t be able to put it down until it’s over, but you’re not going be pleased with it. So start it, or don’t, but either was it is a commitment to reading the whole story, or never reading it. Also, The reading is great.

Robert Silverberg is by far my favourite author, but the Book of Skulls wasn't at all what I expected. I thought it had to do with a search for the secret of immortality, but it actually dealt with a bunch of neurotic teenagers in search of some meaning in their useless lives. Along the way they have a number of graphic homosexual experiences that weren't to my taste at all. This is considered to be a classic, but you really have to be in the mood to stomach it. Try listening to The Tower of Glass, Lord Valentine's Castle or anything else by Robert Silverberg instead. However, Stefan Rudnicki does a magnificent job of reading a number of these works. His resonant voice is perfectly suited to Robert Silverberg's prose.

Absolutely awful story and wasted time listening to this. I’m surprised this book got even published. Avoid at all cost.