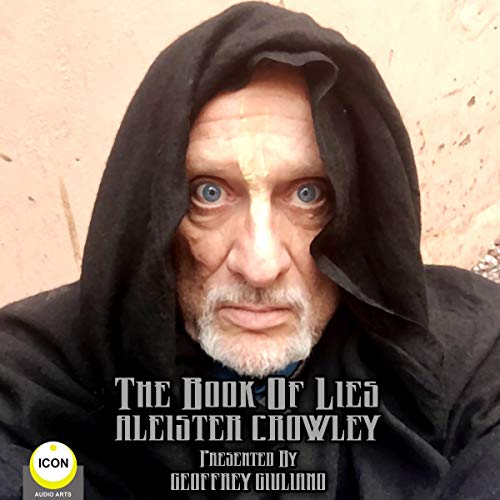 The Book of Lies Aleister Crowley

The Book of Lies, or Liber 333, is a holy book in the Western occult tradition of Thelema, consisting of 91 short chapters of poems, aphorisms, rituals, and metaphysics. This recording is of the original 1913 publication, and thus omits the further commentaries added by Crowley for subsequent additions. Those familiar with Crowley’s hermetic writings will recognize his subversive and playful style. Beneath the layers of symbolism, contradiction, and blasphemy lies a biting critique of the puritanical social, political, and religious values of the author’s generation.

Produced by Devin Lawerence in Vrndavana

Mixed and assembled by Macc Kay in Bangkok

Special thanks to author Brandon Stickney, Swami Neelmani, and Sai

Music By AudioNautix With Their Kind Permission

What listeners say about The Book of Lies Aleister Crowley

Narrator performance made it unbearable

The words of the story seemed like they may have held an interesting if not insightful message, but I couldn't get past the ridiculousness of the forced baritone voice and drawn out syllables. It sounded like a terrible actor mimicking a stereotypical campfire ghost story and it undermined the writing so drastically, that I had to turn it off. It would be nice to hear this read in a normal tone with the inflection as punctuated rather than what sounds like the voice of a ritual master in a C level 1980's film right after he peels back the golden goat mask to draw a pentagram on his forehead with the freshly ripped out beating virgin heart in his bloody fist...anyhow, if anyone plans to ascertain anything meaningful out of this, I suggest just reading it yourself.

It is a book of lies, I might lie about even this.

Anyone who listens to this and can’t understand the low review didn’t get the concept played out in the reading of it.

Listen to it if you’re on the fence about it.

to die is to beget.

kill heal thy self.