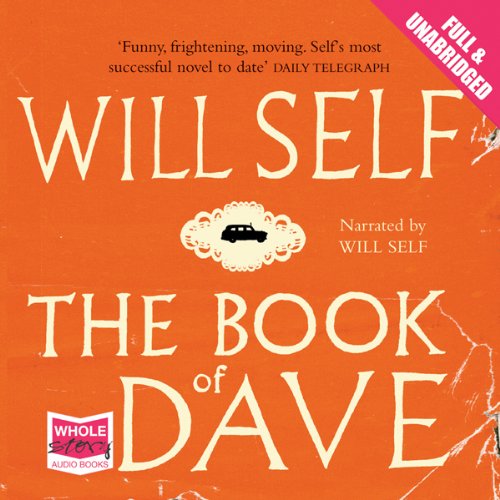 The Book of Dave

The Book of Dave

What if a demented London cabbie called Dave Rudman wrote a book to his estranged son to give him some fatherly advice? What if that book was buried in Hampstead, and hundreds of years later, when rising sea levels have put London underwater, spawned a religion? What if one man decided to question life according to Dave? And what if Dave had indeed made a mistake?

Shuttling between the recent past and a far-off future, in which England is terribly altered, The Book of Dave is a strange and troubling mirror held up to our times: disturbing, satirizing, and vilifying who and what we think we are.

What listeners say about The Book of Dave

Its a bit bonkers and whilst some might be a but frustrated by the ending, the sheer inventiveness, humour, humanity and Will's brilliant reading made this thoroughly enjoyable! If you're looking for something different, engaging, well written and read and funny, you'll enjoy it.

This book is a clever and witty. Beautifully and creatively written it is, for me, a vicious and hilarious attack on how people can take religious or pseudo-religious writings and bend the meaning to their own pursuit of power.

Self creates a world that is mad, but where the source of madness is explained in an inventive and amusing manner.

This is one of two Self books I've read. This one I loved; the other I hated.

Would you listen to The Book of Dave again? Why?

Yes - as a lot of what happens in it is so clever, you need time to digest it!

Have you listened to any of Will Self’s other performances? How does this one compare?

No - but he is an excellent reader - possibly a little slow, but I found that playing it at a slightly faster speed - 1.25 - was perfect!

Whilst I did enjoy this book, it left me a little depressed. The situation in which this society finds itself (I can't say too much without giving away the plot) is so true of modern religious faction, yet so far from reality, that it leaves a bad taste. However, it is very funny throughout and is very well written. Will Self is certainly a master at thinking outside the box and getting to the nub of human existence. Depressing though that nub might be. I wouldn't recommend this book to everybody, but for many it will give both amusement and perhaps food for thought.

Great idea, but my word - this book is painful to get through. I had to go over the first chapter twice, it didn’t make sense either time. The book consists of made up words, cockney slang, there’s no order to the story - I mean none at all. It really is hard work. Sadly it’s not not very enjoyable either. The hard work just isn’t worth it

Would you listen to The Book of Dave again? Why?

Brilliantly narrated by Will Self with a certain supercilious verve the story by turns ludicrous, cruel, racist, sexist, istist, becomes a moving archaeology of London and revealed religion all shook by a thousand taxi rides across the metropolis past and its dystopian future.

Will Self reads and this is a real treat. The book is one that shaped my thought and reverberated threateningly over the months that followed...

This book challenges but it's worth it.

If you could sum up The Book of Dave in three words, what would they be?

dripping with satire. It was extremely good on mental health. I loved the sci fi aspect. Self is apparently a huge sci fi addict and it reminds me of bits of Ballard and Dick as well as Heller and Houellebecq. The characters were real and vivid. Loved the motos
I listened on audiobook so found bits a bit hard to follow until I got into "mockney" and "arpie"
Saying that it is very original. I just loved it.

You couldn't make a film of this book so please don't anyone try!

This is an uncomfortable, challenging book which is truly tragic but has it's moments of redemption. Come to terms with it's message and you will be a much better and wiser person

I found this book very difficult to get through. Although the concept of the book is an interesting one, I found the narration very monotone and therefore hard to listen to.

OMG please don't force me to read this!

What would have made The Book of Dave better?

If you like listening about a fat, sad guys who can't pull it together then that's a book for you.

What was most disappointing about Will Self’s story?

There is no point to this book. What is the message?

Pointless, over the top and boring.