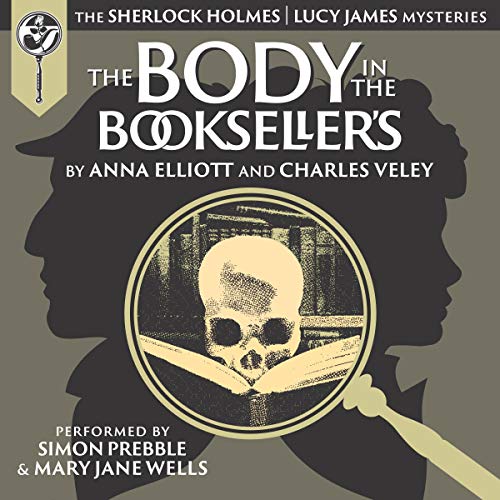 The Body in the Bookseller's

A deadly secret. An evil plot. And a race against time to save England from disaster. Performed by acclaimed narrators Simon Prebble and Mary Jane Wells.

London, 1899: When a mysterious packet is stolen from a diplomatic courier, Sherlock and Lucy are called upon to recover it before its ominous contents fall into the wrong hands. Their best hopes for success lie with a pretty young bookstore attendant and her father, the kindly, old bookstore owner.

As they work to recover the stolen packet, the Baker Street gang uncovers a dark, tangled web of intrigue and an evil plot that could very well bring all of England to its knees. When a notorious criminal is found dead in the bookstore basement, and the bookseller is arrested for the crime, the danger becomes very real and very personal.

Can Holmes and Lucy find the perilous packet, catch the murderous mastermind, and foil the fiendish plot? Or will the case of the bookseller prove to be the Baker Street team’s final chapter?

A fun and thrilling take on a classic Sherlock who-done-it, with memorable new characters, unexpected twists and turns, and international intrigue, The Body in the Bookseller's stays faithful to the spirit of the beloved original series, while showing the true value of family and friendship.

What listeners say about The Body in the Bookseller's

Ms Wells does a great job clearly delineating between characters and much better with accents and interpretation than her predecessor. I hated to deduct stars before because the plots are fun and enjoyable. However I should have, because the content deserved a more skilled female reader who could adapt to the numerous accents. Mr Prebble has always done well which kept me listening to the series. Thanks for the change. Nothing personal against Ms King, but her repertoire wasn’t broad enough for these characters.