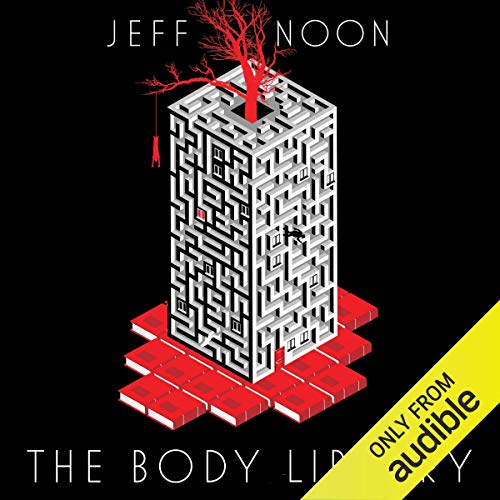 Jeff Noon returns with a sequel to the acclaimed A Man of Shadows, taking his hapless investigator into a city where reality is contaminated by the imagination of its citizens.

In a city where words come to life and reality is infected by stories, private eye John Nyquist wakes up in a room with a dead body.... The dead man's impossible whispers plunge him into a murder investigation like no other. Clues point him deeper into an unfolding story infesting its participants as reality blurs between place and genre.

Only one man can hope to put it all together, enough that lives can be saved.... That man is Nyquist, and he is lost.

What listeners say about The Body Library

I loved it... Meta fiction as grief counselling...

The overriding theme of the meta fiction and the loss we all inhabit, we’ve all lived, we’re all implicated in. That’s true for all of us who’ve experienced the loss that permeates all of Jeff Noons books anyway. It’s as if he’s seeking a panacea of healing and sorrow and he keeps reworking that into all of his fictions to weave a meta fiction. Occasionally the narrative begets clumsiness, literary devices reused become tiresome to myself as the reader but by the end of every story; Jeff Noon has woven me back into the story. His fiction, my meta fiction. It really is a beautiful thing. As to the narrative, it’s hard boiled and he plays with the cliches expertly. It’s what the readers have come to expect and his is not a disappointing effort. I still miss the dream we inhabited in Hobarts head but the sense of direction in Noons narratives is much cleaner and clearer with every book. If this is your thing then it’s great work and if not then you’ve missed nothing. Books have their fates depending on the comprehension of the reader after all is said and done...

This is a very strange story, very entertaining. You just fall into a weird world