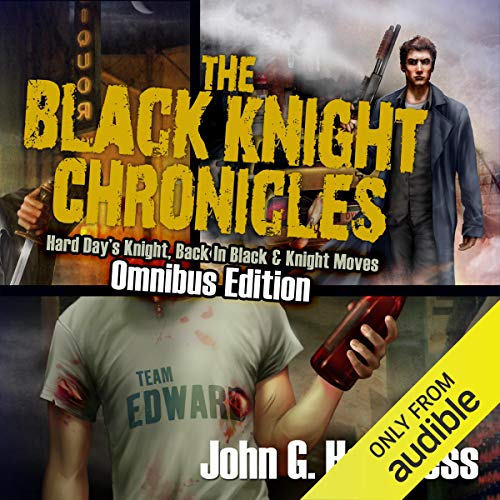 The Black Knight Chronicles: lots of vampires. No sparkles. Serious snark. This bundle includes books one through there: Hard Day's Knight, Back in Black, and Knight Moves.

What listeners say about The Black Knight Chronicles: Omnibus Edition

Ok, True Believers, I have a confession to make. I am a Bubba the Monster Hunter fan. That is all I have ever read from our beloved John G., and that was all I ever wanted. Then I got an opportunity to sit down and take a listen to something else that he had done. What blasphemy was this? Could I cheat on Bubba? Ws it Ok that I get to know a new character? What would I do if I found out I didn't like the new guy? The world may never know. Because I freaking love this series.

One thing I was afraid of was that it would lack the humor that the Monster Hunter series has; it lacks for nothing. This book is just as funny and goofy as Bubba's series, maybe a little more so because there are 2 really silly characters here. The book is about a pair of vampires, one skinny and one not so much so who work as PI's. They coordinate with a multitude of Scoobies to help them as they bumble their way through their unlife. WHo are their Scoobs you ask? A priest, a fallen angel, A police chief, you get the idea. This isn't your average super squad. And that makes it fun. I got this book a while back, but am only now getting a chance to review it. I'm glad I waited, because if I hadn't I would not have had the opportunity to really have this awesomeness permeate my brain. It made me laugh, and brought a ton of excitment to my dulled brain. I really needed to step back, so that I did not overly compare it to BtMH.

One new thing was that I got to listen to Nick Russo for the first time. My experience with Hartness on audiobook format had John Solo doing all the hard work, and I really grew to appreciate him and felt that he actually embodied the spirit of the Bubba books to a Tee. Now, I feel the same way about Russo as a narrator. He pulls off the goofy and the grave equally well. I really enjoyed his personifications of the boys, and can't imagine anyne else doing this job. I am really impressed with this studio's voice actors. Top Notch all around.

The series itself, containing the 1st three books here, is fun, fast paced, full of laughs, furiously plotted, and feverishly clever. I don't know how you could read this and not love it to pieces. Go out, give this book a try. The listening will be as easy as putting on a soft rock station and closing your eyes, and then getting swatted in the face by a fly swatter for not paying attention. DOn't pass this book up, it is too much fun for you to let it slip on by. Even though I did receive a promo code for this review it in no way influenced my considerations of the material, and in fact, inspired me to be more honest. In fact, getting a code generally makes me harsher as a reviewer as I am more often concerned what someone like Me will decide based on my review.

Not for me here is why.

I think the target age for this series is 13 till 17. the jokes fall flat, the storyline is very basic, and the characters completely lack depth. the book wasn't horrible I've read worse however I will never buy another book in this series. I finished this one however and I don't feel you can actually write a review if you don't finish the book. to me the book was entirely too hokey. the narrator did a decent job, but I became annoyed with him honestly I think due to the poorly written jokes.

in summary I would not recommend this book to anyone I know.

Thank you Audible for the box set of the first three books on this series. The story line is very good with good characters. Jimmy Black and Freg Knightwood are two vampire private investigators. They were hired by a client who was cursed for eternity. They got pulled into a bigger plot involving possession of human children to bring an ancient evil from hell to the world. They were aided by a police detective, a priest, a witch, a fallen angel to save the world. Very well written and performed by Nick J Russo. I hope John G Hartness will write more books on this series my request is that the story be longer than right now.

I have to say that this was the first time that I saw so many different nuances woven together to make a good story
really fantastic. It was serious, funny, dramatic and so much more. It had vampires, priests, cops and more. Shades of Dresden. This not only does nail you to the story line it is seriously entertaining. And for a older woman reading by audiobooks instead of my eyes I have to say that some people try books partly because of the cover picture I am glad I went with trying it anyway. Terrible cover art but astounding book. Kudos to you.

I was surprised to find how much I enjoyed this omnibus. I finished each book with a smile on my face. The narrator was terrific and made the story come to life.👏👏 I voluntarily reviewed this audio book after receiving an advanced copy I requested.

The story was good ish, a bit to predictable but worth a listen.

Way to many inconsistencies, and way to many weapon mistakes,
Prime example,
"he slowly pulled the hammer back on his Glock" "pulled the trigger the the clip in the Glock rand out"

Of course it could just be me,

Loved the Quincy Harker books, This character is "Meh!" i mean the cop girlfriend was from the same precinct as Quincy and everything. I mean, how did the two not cross paths IN THE SAME TOWN! That might have made it more interesting.

Great story and skilled narration. Onto the next three!

I was looking for something in the vein of the Tome of Bill series, and this did not disappoint.

It feels rushed for the first few chapters of the first book but it finds its rythem eventually. The Snark is good and the love story isnt over bearing. The snark is good and its pretty funny at parts. The main character isnt a super badass or completely testosterone driven, which is refreshing. The suport characters are likeable if not a little predictable. Over all its not going to win any literary awards but its a fun read.

Wise cracking private eye detectives who happen to be vampires and end up mostly on supernatural cases. The humor is good, the action is good and the narration is good. The three books contained here, A Hard Day's Knight, Back in Black and Knight moves are all very good and consistent with the genre. Enjoyable and entertaining.

When I started listening to this book I have to say I did not think I would like it. It was only after the first 8 or 9 chapters that I really settled into the first story. By then I was totally hooked and became completely imerced in the series. It is really very good and has many funny moments that made me laugh. It is supposed to be a serious story about 2 vampire detectives and a human police officer and a priest fighting supernatural villains. For the most part it is, but it is also their struggle to cope with what life has dished out to them. So some of the 3 stories have sad moments as well as triumphs. The series is very well written and I commend the author for that. The narrator is brilliant he is a perfect choice and I liked him a lot.