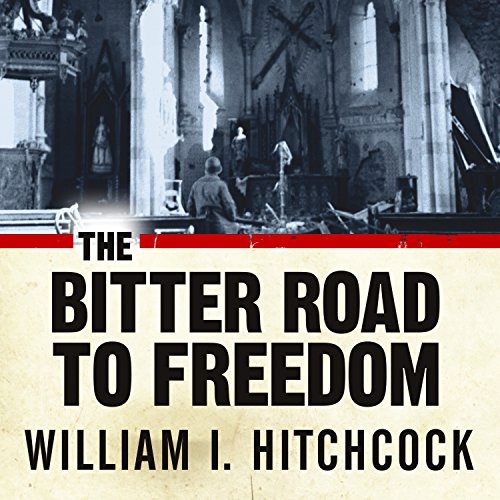 The Bitter Road to Freedom

By: William I. Hitchcock
Narrated by: Mel Foster

In a story about the liberation of Europe during WWII, the author places a sad and shocking focus on the suffering of civilians caught among the warring armies. Instead of concentrating on the movement of troops or war strategy, Hitchcock investigates such subjects as hunger, rape, and postwar internment. At first, narrator Mel Foster sounds stilted and emotionless. However, in a short while, his voice moves to the background as the author's appealing knack for prose takes the limelight in a story filled with eloquent word pictures. Foster's French far exceeds his skill with German. His narration on the writings of Ernie Pyle, the most famous war correspondent, may be the best part of his performance.

Americans are justly proud of the role the United States played in liberating Europe from Nazi tyranny. For many years, we have celebrated the courage of the Allied soldiers, sailors, and aircrews who defeated Hitler's regime and restored freedom to the continent. But in recounting the heroism of the "greatest generation," Americans often overlook the wartime experiences of European people themselves - the very people for whom the war was fought.

In this brilliant new book, historian William I. Hitchcock surveys the European continent from D-Day to the final battles of the war and the first few months of the peace. Based on exhaustive research in five nations and dozens of archives, Hitchcock's groundbreaking account shows that the liberation of Europe was both a military triumph and a human tragedy of epic proportions.

Hitchcock gives voice to those who were on the receiving end of liberation, moving them from the edge of the story to the center. From France to Poland to Germany, from concentration camp internees to refugees, farmers to shopkeepers, husbands and wives to children, the experience of liberation was often difficult and dangerous. Their gratitude was mixed with guilt or resentment. Their lives were difficult to reassemble.

This strikingly original, multinational history of liberation brings to light the interactions of soldiers and civilians, the experiences of noncombatants, and the trauma of displacement and loss amid unprecedented destruction. This book recounts a surprising story, often jarring and uncomfortable, and one that has never been told with such richness and depth.

Today, with American soldiers once again waging wars of liberation in faraway lands, this book serves as a timely and sharp reminder of the terrible human toll exacted by even the most righteous of wars.

What listeners say about The Bitter Road to Freedom

I tried several chapters hoping to find something interesting but I gave up after the 4th chapter. I was very disappointed that Audible did not allow me to return the book. They simply mentioned "not eligible for return", yet they took my membership money. This is reducing Audible attractiveness and my goodwill willingness to subscribe.

Revisionist History in the GOOD sense of the word

There are audiobooks that make you laugh out loud in public but this one had me in tears on the subway more than once. Fortunately, the reader had an academic style, which kept the book from being even more difficult to bear. The book is also academic in nature with distinct chapters devoted to various populations. In addition to actually learning a lot of history, what I got from the book was a sense that I (and a lot of other people who grew up in the '50s) had been effectively brainwashed - the book contrasts press presentations such as those of The Allies entering Paris with the lack of information on the misery and devastation on the Normandy front, the starvation of Holland, and a number of other situations in which 'the little people' felt the pain of the efforts underway to free them from Nazi rule ranging from actual bombing to misplaced political and military decisions. Not an easy read, but a must read for anyone attempting to understand WWII and the years that followed (up to the future for that matter).

Wonderful listen and gripping account of WWII through a western lens. While this book is a perfect standalone work, I would highly recommend reading "Bloodlands: Europe between Hitler and Stalin" (by Timothy Snyder) as a companion book. While Hitchcock's book provides a vivid western account, there is a whole other side of the war that goes for the most part unmentioned. Snyder's book provides a gut-wrenching account of the atrocities committed by both the German and Soviet forces in eastern Europe and helps to provide a more complete context for the war. After reading both books I felt as though I had a complete understanding of the European theater of WWII rather than a fragmented western view.