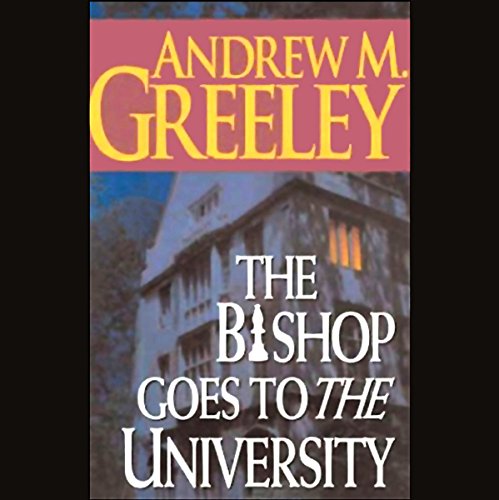 The Bishop Goes to the University

The irrepressible Bishop Blackwood Ryan returns as his Cardinal dispatches Blackie to The University on the South Side of Chicago to investigate a baffling locked-room mystery. Someone has assassinated a Russian Orthodox monk in his office at the Divinity School, despite the fact that the door of his office was bolted shut from the inside and no killer was found within.

Who shot Brother Semyon Ivanivich Popov? There were only four professors in the building on the night of the shooting: a feminist theologian, a distinguished scripture scholar, an expert on the Talmud, and a young tenure-seeking professor whom Blackie compares to a silverback gorilla.

It turns out that the mystery of the locked room is simple compared to the international intrigue that swiftly develops around the case. Intelligence agents from diverse nations seem to be involved, as well as both the Sicilian and Russian mobs. Blackie soon finds himself the target of threats and actual bullets as he seeks to unravel the deepening mystery surrounding the murdered monk, whose murky secrets may stretch all the way to the Vatican itself!

Murder is more than academic in yet another delightful whodunit by one of America's most popular storytellers.

What listeners say about The Bishop Goes to the University

A very good mystery! Excellent narration! My only question would be, "Why abridge it?"

Oh please, give this one a listen you will not be disappointed all the Bishop Blackie stories are special.

.t was all thay expectedI

Andrew Greely has always been one of the few authors that not has only kept my attention, but made me want to follow all of Blkackie adventures

Enjoyed the book and the humor of the author. Would like to hear more of bishop Blackie adventure on audio book.