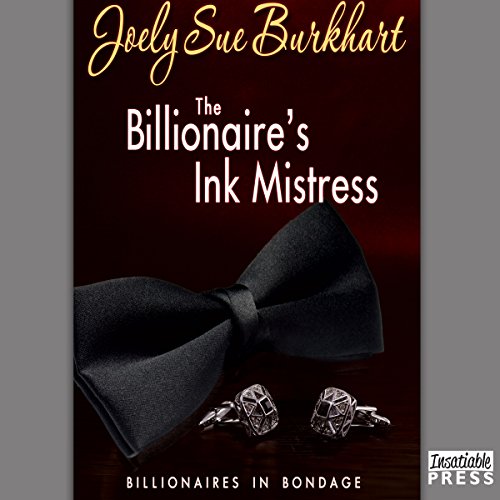 His desire for her pierces deeper than skin.

The Lawyer. Jackson Montgomery Warring never lets opposing counsel see him sweat. Juggling a dozen billionaire clients on a daily basis, he's always perfectly prepared, calm, cool, and collected. Until he meets his best friend's fiancée, the luscious Mistress L. Now he wants a Mistress for himself. Badly. Except the one who's caught his eye is his complete opposite - a Goth-booted, tatted, and pierced priestess of the local tattoo scene.

The Secret. If she thought her edgy style might turn him off, she's happy to discover she's wrong. But when she learns his secret addiction, she might refuse to teach him a thing or two about submission. Or maybe she'll just punish him harder....

Warning: A rich, successful attorney in a downward spiral; a tattoo artist who happens to be a Mistress; a secret addiction and a peek at exhibitionism/voyeurism.

What listeners say about The Billionaire's Ink Mistress

Most books feature a bad boy with a good girl, so it was interesting to have a bad girl with tattoos with a clean-cut man. I love male submissives but don't always feel like there's enough education between female Dommes and male submissives. The "Priestess" was unique and showed there wasn't a one-sized fit all type of Domme style. She liked to be topped(which isn't the same thing as being submissive; it just means you receive certain aspects in scenes, like being the receptor. overall outside and inside the scene, you're still Dominant, because you give the orders).

I think the only thing it was missing was a different Dom style than her predecessor; yeah she looked and dressed different, and she was open to being topped, but she felt really similar to the heroine from book 1. Overall I'm glad I read, loved it in comparison from the first, especially when she explained how much power he has as a sub!

I really love how Joely-Sue Burkhart writes female dominants for women rather than the men's fantasies than you often find. A lovely romance with plenty of consensual kink and positive characters.