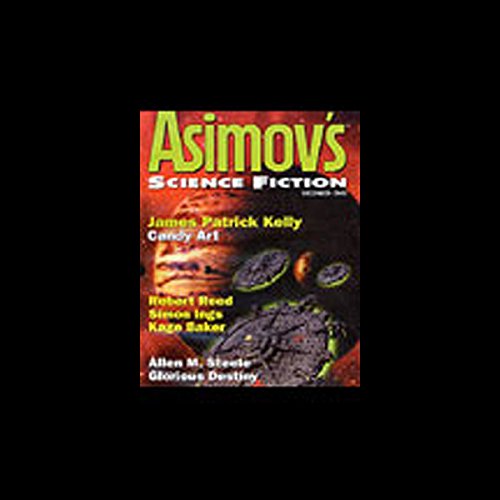 From Asimov's Science Fiction Magazine, here are the best stories of 2002, written by four of the most respected writers of our day and edited by Sheila Williams and Gardner Dozois.

Gregory Benford, an undisputed master of "hard" science fiction, provides the opening story, "The Clear Blue Seas of Luna," examining some of the technical and political implications of terraforming the moon.

Ian Watson, most recently notable as the writer of the screenplay for Stephen Spielberg's AI, depicts an ocean world covered in wood, where ships sail in search of leaves, and fortunes are to be made and lost. Watch for a new twist on the AI theme in Watson's "Speaker for the Woodland Sea."

James Patrick Kelly's hip prose and state of the art storytelling are well represented by "Candy Art," a romantic sitcom about what happens when your deceased parents move in with you and your boyfriend.

Finally, "With Caesar in the Underworld" is Robert Silverberg's latest installment in his alternate history of the Roman Empire, the underworld in question being the vast bazaar of questionable products and services literally under the streets of the eternal city.

I'd give this collection 5 stars for the stories since I love science fiction short stories, but the collection is mislabeled. The Best of Asimov's should have way more than 4 stories. The leading Hartwell & Dozois annual best of anthologies have 20+ stories, many of which appeared first in Asimov's. For this grand title of best of 2002, I'd say we deserved at least 10 stories, 12 would probably be truly representative since every year Asimov's has many stories nominated for numerous awards and the collection should contain those stories.

But to be balanced this collection is priced the same as the bi-monthly F&SF magazine Audible publishes and this volume has more than an hour more of content, which makes it more of a bargain.

Most importantly, the stories we do get are outstanding.

Not the best sci-fi I've read

The four stories are highly variable in quality.

I didn't care at all for the first story, "The Clear Blue Seas of Luna." It's written in an extremely abstract manner, almost stream of consciousness. The plot is hard to follow, and fails to excite. I suspect that this story may be part of a larger body of work, but as it is presented in isolation it is simply confusing.

"Candy Art" is fun and funny. My only complaint is that it falls short of delivering a solid conclusion.

"With Caeser in the Underworld" is also thoroughly enjoyable, but ultimately pointless. It left me with a number of unanswered questions, wondering if there was some foreshadowing that I was supposed to notice.

All of the narrators are excellent. They speak clearly, and at a good pace.

Ultimately, it's a good way to waste a few hours, but it is not suitable if it is to be one's first or only exposure to sci-fi short stories.

Expecting much, got little.

Since the title says "The Best of..." I was expecting the best, but was very disappointed. Maybe I am not on the same wavelength needed for the content. I hope that 2003 edition is much better.

I'm a big fan of science fiction short stories--I own every one that Audible has. This is the worst. Only one memorably entertaining story out of four.