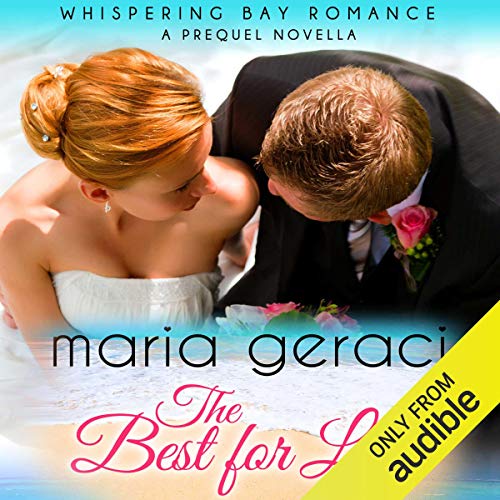 The Best for Last

The Best for Last

Welcome to the world of Whispering Bay Romance, where hot heroes and smart heroines collide to find their happily-ever-afters!

Kitty Burke's biological clock isn't just ticking, it's gonging. But who wants to be tied down by marriage and a minivan when you have an amazingly sexy boyfriend who worships the ground you walk on? Sure, Steve has never said those three magic words. But, Kitty knows he loves her. Some guys just have a hard time expressing their feelings, right? Right.

After three failed marriages, Steve Pappas is in no hurry to walk down the aisle a fourth time. As a matter of fact, he has no desire to ever say "I do" again. He's a successful self-made millionaire, but despite the best of intentions, marriage is one arena he's been unable to conquer. Kitty is funny, sexy, and whip smart - everything Steve has ever wanted in a woman and more. Their life is perfect the way it is now. So why rock the boat and ruin everything with a piece of paper that doesn't mean anything?

When Kitty's aging playboy father unexpectedly decides to tie the knot, Kitty realizes she's been fooling herself. She does want it all - marriage, kids, but most especially, a man who isn't afraid to openly declare his feelings. Can she convince her commitment-phobic boyfriend to take the ultimate chance? Or will she be forced to settle for happy for now instead of happily ever after?

This book is a prequel novella. As with all the books in the Whispering Bay Romance series, it can be enjoyed as a stand-alone novel.

What listeners say about The Best for Last

Not the usual romance novel

I am not a fan of romance novels, but stumbled into the Wispering Bay series and am glad I did. I have gone through all available books in less than a week and am looking forward to the next release. The stories are well written creating a desire to be immersed in the lives of the characters. I was surprised to find that I was genuinely interested in what would happening next. The stories ring true and real based on my life experiences. Finally, I appreciate the elegance of the writing, and the superb narration. I highly recommend the series.

Kitty almost let her friends help her loose her man. Most of ithe women in this series almost ran off their men. I guess misery really does love company. This group of women was good at finding problems where there were none or blowing a small problem up into a toxic mess.

BETTER WITH EACH BOOK

The author truly makes you feel the characters emotions from beginning to end. LOVE IT.

NOT 4th book in the series

The events in this (super short) book take place sequentially before Book 1! Such a let down to think there is another book in the series, only to discover a super abbreviated story about a couple of characters that have been in all the previous books...and the story takes place before any of the other books.