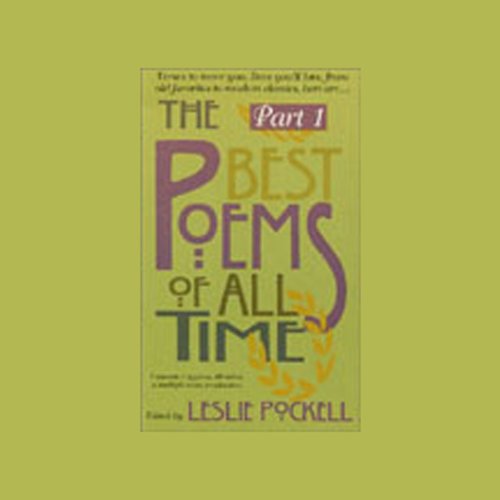 The Best Poems of All Time, Volume 1

The Best Poems of All Time, Volume 1

This perfect poetry companion brings the words of the world's favorite poets to life. Hearing poetry spoken - as it was originally intended to be heard - adds dramatically to your understanding and appreciation of the form. Be moved, amused, and awed by these expert interpretations of even the most familiar poems.

Revisit classics through the 1850s such as:

"...a crackerjack, very accessible compilation...This collection works because of the varied readers and the decision to choose classic material." - (Deirdre Donahue, USA Today)

What listeners say about The Best Poems of All Time, Volume 1

Lines of rhymes - from ancient times

This volume covers the period from ancient times to the 1850's. The choice of poems is excellent although it's inevitable that most listeners will miss a few of their own favorites that didn't make the cut. To counter this, many listeners who have not read too much poetry in recent years will be pleasantly surprise when a favorite but vaguely-remembered stanza or turn of phrase pops up unexpectedly. I notice that some other reviewers would have preferred a short introduction to each poem - the problem with this is that, while the introduction is useful the first time you listen, it is an annoyance thereafter. I thus far prefer this audiobook's approach of climbing in immediately. The various readers were all excellent, although I would have preferred two or three more British readers, to vary the accents. Audio quality (at level 4) is excellent.

This is a series of poems being read with no introduction. That probably works for some, but for me, I prefer "Classic Fifty Poems," that introduces each poem with a little information about the poet and the time in which he or she lived.

Not a great selection and some weird choices like a reading of the battle hymn of the republic...

Poor QC - poems are missing lines (E.g. to Virgins to make much of time).

Some readers are not really aware of what they are reading.

If you already like poetry, this will just annoy you. If you don't and are hoping to learn, look elsewhere

I listen to this book time and again.

Loved it. It is serene and tranquil and energizing I would
recommended to everybody thank you

not what I was looking for.

I was looking for "the raven". looking within this it was no were with in.

Very few, if any, of the poems I found here were ones I thought worthy of the title of the book, one of the exceptions being "The Midnight Ride of Paul Revere".