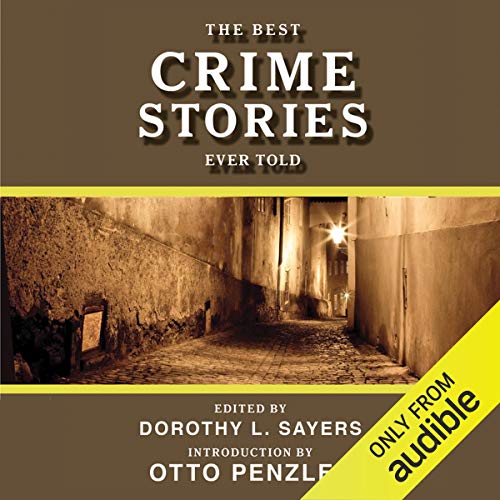 The Best Crime Stories Ever Told

The Best Crime Stories Ever Told

Being an acclaimed mystery writer herself, Dorothy L. Sayers knows a thing or two about what makes a story captivating. In this anthology of short fiction, Sayers compiles over 30 of the best mysteries from the early 1900s, a veritable golden age for the genre. Robin Bloodworth and Suehyla El Attar perform with a robust gusto, clearly reveling in these classic tales by such luminaries as Edgar Allen Poe, Herman Melville, and H. G. Wells. Listeners will be thrilled by the many treasures unearthed in The Best Crime Stories Ever Told.

When acclaimed mystery writer Dorothy L. Sayers first began compiling anthologies of the best crime stories in the 1920s and ’30s, the genre was in the flush of its first golden age. While it is hard to imagine today - after every possible mystery plot has been told, retold, subverted, and played straight again by hundreds of writers over nearly a century - in Sayers’s day there were still twists that had never been seen, and machinations of crime that would shock even jaded Jazz Age fans.

Now today’s fans of mystery and crime can experience a handpicked collection of over thirty of the most outstanding stories from this era, originally chosen by Sayers and newly introduced by Otto Penzler, a leading expert and connoisseur in the field of mystery literature. As a prolific writer of the genre, Sayers understood the difficulty of putting together a mystery that was not only sufficiently challenging (so that the solution was not immediately obvious to the listener), but also solvable without forcing the writer to cheat. That balance between opacity and solvability remains the greatest challenge of writing great crime stories - and these are some of the greatest.

Authors appearing in this collection include:

What listeners say about The Best Crime Stories Ever Told

What disappointed you about The Best Crime Stories Ever Told?

What a disappointment, I love the crime books of Sayers, However, this collection degenerated into an anthology of ghost stories - not interested in Ghost stories and the write up should perhaps have been a bit more explanatory.

Has The Best Crime Stories Ever Told turned you off from other books in this genre?

No - The book is not a collection of Crime Stories.

Who would you have cast as narrator instead of Robin Bloodworth and Suehyla El Attar ?

Any one else would have been better as a narrator, he is particularly hard to listen to and the material did not help.

Not really, it was long and I felt I had to give it a chance, but half way through book 3 I gave up. I wanted crime not ghost stories or philosophizing.

Audible should perhaps give a more accurate write up. The least favourite book I have chosen so far, but I guess there are going to be books I don't love. Having said that someone who liked this genre may love the book, I just felt a little cheated - by Sayers - is that a little weird?

Robin Bloodworth has almost singlehandedly ruined one of my favorite genres. The stories are intriguing, but I can't get past that voice. Fake British accent, drawling to the point of driving someone, who loves legit British accents, mad. In his regular voice he sounds OK American. I'm a diehard Sayers fan. Or at least I was.

A bit confused. There are a few crime stories but most are supernatural stories. Definitely a British/Continental tilt to the story selection which helps bring out lesser known stories.

Lot of duds, some gems

If you like bobbing for apples when most are duds and the chance of getting a mouth full of mealy monster mush is guaranteed, you're ready to buy "Best Crime Stories" edited by Dorothy Sayers.

Most of these stories take place before crime writing came into its own. We get loads of gentlemen sleuths: pipe puffing know-it-alls who lack the quirky charm of Sherlock but like him steamroll over dumb cops to get the answers.

Then there are ghost stories, lots and lots. Speaking beyond the grave. Rattling the china. Scaring the horses. Edgar Allen Poe is not at his best here. He's trying out his themes of romantic loss and obsession without the crisp architecture of his best tales. The gems? Almost worth it for the Stephen Crane, the H.G. Wells and the Melville. That's about two good hours out of twenty. Is this a recommendation? Depends on how bored you're willing to be.

No complaints about the narrators.

Not great for British English speakers

What disappointed you about The Best Crime Stories Ever Told?

Sadly, even though the reader obviously put in a lot of effort, the accents and voices he used were terrible. All the Europeans sounded like bastardised Arnold Schwarzenegger and the British accents were painful. I'm giving it back. I couldn't get into a single story because I kept waiting for the dreadful voices.

The stories are probably alright but the narration id dreadful.

It could not be worse.

I shall be returning this book of stories.

Who might you have cast as narrator instead of Robin Bloodworth and Suehyla El Attar ?

What character would you cut from The Best Crime Stories Ever Told?

the title of this book is completely misleading as most of the stories were stories of the supernatural, and had nothing to do with crime. I'm very surprised that Dorothy L. Sayers was associated with this book. Also, the narrator is American and pretending to be English. In this respect, he just couldn't do it, although he was otherwise a very good narrator. This wouldn't have made it under the trades descriptions act, but I suppose it's exempt.

What would have made The Best Crime Stories Ever Told better?

I feel sad that Dorothy L Sayers' selections are being read by a man who drawls his words in an unsustained but in any case execrable British accent. I dread the female voice and, in any case, am so alienated by the male reader I may not get that far.So, to improve would mean re-recording with the reader having an accent suitable to the stories and capable of empathy with their content.

What was one of the most memorable moments of The Best Crime Stories Ever Told?

Should I get to the end I'll amend this review.

If you could play editor, what scene or scenes would you have cut from The Best Crime Stories Ever Told?

It's hard to tell as the reading is so bad I can hardly concentrate on content.

Strange accents and really not that great stories.

I found it hard to listen to the story is mainly because the narrators are attempting an English accent that frankly is nothing like any English accent I've ever heard. It makes it extremely hard to concentrate on the story itself. I'm also kind of surprised that these stories are meant to have been pulled together by Dorothy Sayers and also I rate very highly, because they're really not very good: very run-of-the-mill Victorian/ Edwardian crime stories.

Would you try another book written by Dorothy L. Sayers (editor) or narrated by Robin Bloodworth and Suehyla El Attar ?

Hmm, whilst two of the stories were interesting and verging on intriguing, overall this book was a disappointment. I enjoy all sorts of crime and mystery fiction because there is a mystery to be solved. However, in this collection I was completely at a loss in many of the stories to work out what the mystery might me. I have given up trying to plough through the book having got to the half way point, but I will persevere at a later date because I have paid for the recording. I have to say though that given a choice I'd want my money back. If you like PDJames, Reginald Hill, Anne Cleeves, Nicci French, Ian Rankin or any of their contemporaries you probably won't like this collection.
So far I have only heard one story read by the female actor and it was well read. However, the male actor has his limitations. Whilst he can clearly tell a story well he is not good voices and at times I found that I was getting a little confused because the different characters were not distinctive enough from one another. In some of the stories the voices were quite dreadful.
Overall I think I have been generous giving 2 stars.

I couldn't get past the awful English accent of the male narrator to actually listen to the whole book.

The best crime stories ever told

A total lie rubbish stories told by rubbish readers a miss. Named volume bad accents all in all thoughly poor

The stories in this anthology my be interesting and entertaining but you can't get past the terrible supposedly English accent. If you like horror then this will fit the bill on that aspect!

many stories engaging but male narration (accents/characters) spoiled the experience. he's better in other works