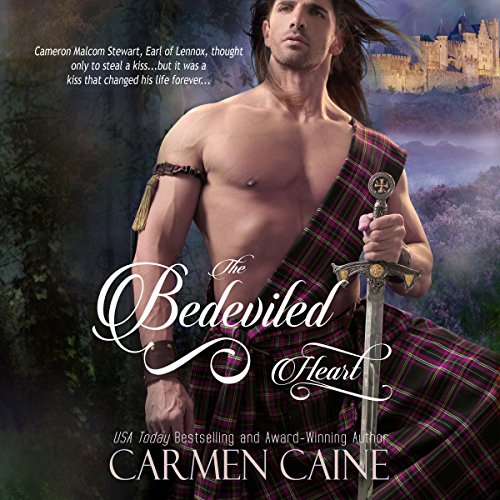 Scotland, 1479 - Cameron Malcolm Stewart, Earl of Lennox, had made his peace with destiny. It was not his fate to love as other men.

Wed and widowed seven times, he had come to believe that sharing his name alone would consign a woman to an early grave. So, on the sunny spring day Cameron encounters a delightfully devious, bright-eyed lass selling charmed stones in one of Stirling's alehouses, he tosses her a shilling, thinking only to steal a kiss. But it is a kiss that will change his life forever.

To care for her ailing father, the precocious Kate Ferguson has resorted to swindling the drunkards of Stirling. But a chance meeting with a handsome and seductively mysterious outlaw named Cameron ends with a kiss that changes the course of her destiny. But as dark times descend upon Scotland, Kate is inadvertently caught in a deadly web of court intrigue spun by the royal favorite, Thomas Cochrane. And as King James III falls prey to his fear of the Black Arts, accusations of witchcraft and treachery abound.

The fate of Scotland itself hangs in the balance, and while Cameron vows to defy destiny itself to hold Kate forever in his arms, he must unravel the plots of nobles and commoners alike to protect the country that he loves.

What listeners say about The Bedeviled Heart

it's a shame that such a delightful story was narrated by the worst narrator I've ever heard. I almost returned the book...but glad I stuck with it for the story. if Carmen Caine does any more Scottish romances I sure hope she chooses a different narrator!

Wonderful storyline. A true love can conquer all performance. Narrated with an exceptional Scottish accent.

why is the narrator American and not Scottish the series is set in the highlands this makes no sense!!!!