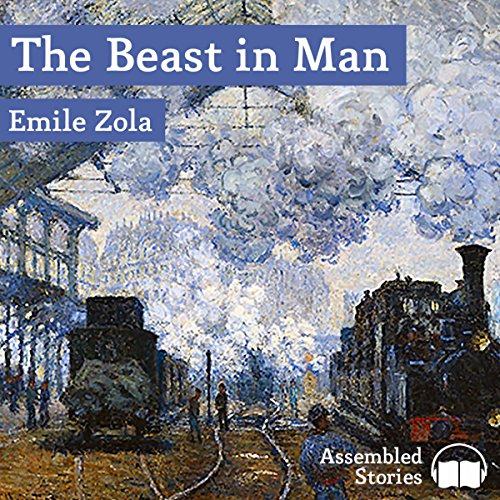 The Beast in Man

Sex, betrayal, murder and corruption form the basis of this sensational novel by one of the leading French authors of the 19th century.

Jacques Lantier is a man with a hereditary homicidal lust. When he sees Roubaud and his wife Severine slit the throat of a wealthy nobleman, it is the catalyst for a string of murders in a convoluted plot full of horror and suspense. Severine starts an affair with Jacques to keep him from informing the authorities, but the couple soon realise that Roubaud has become an obstacle to their happiness.

The malevolent Flore, feeling spurned and betrayed, takes her revenge in catastrophic fashion. If Jacques could cure his illness with just one murder all might be well - but who will be his victim? And can he stop there?

Zola constantly reminds us that underneath the veneer of education and an accepted moral code, the savage beast will always remain. Characteristically, the writer doesn't shy away from the raw sexual element and baser human impulses, confronting us with a truth that, while not always palatable, is always enthralling. It is a brutal study of individuals derailed by primal forces beyond their control which, at the close, leaves us questioning our belief in ourselves as civilised creatures.

What listeners say about The Beast in Man

Zola’s novels, at least the ones I’ve read, seem to be focused on everything that is worst about human beings: greed, violence, promiscuous sex, putrefaction, and squalor. Yet his plots are exciting - if at times melodramatic - and his characters thoroughly developed. So as unpleasant as they may be, they make compelling reading.

The Beast in Man (or, as I believe it could be translated, The Human Beast) is about trains: sort of. It's really about the people who make the trains go, but there are times when the great hulking machines themselves seem alive. A wrecked engine is pronounced "dying" and then "dead." An engine being driven for the first time is having its "virginity taken." The engines are given names by their engineers and caressed like lovers.

Zola has mastered his subject and presents it to us with a wealth of circumstantial and convincing detail; and it takes the form of a novel-sized metaphor, with the fate of the characters hurtling down the tracks like a train with no driver. His description of a train derailment in one chapter - with Peter Joyce’s passionate narration - has a visceral impact light years beyond train wrecks in films like The Fugitive and Under Siege 2. Only when the deafening scream of escaping steam recedes can the screams of the survivors be heard. I don’t often shudder when reading a book, but I shuddered repeatedly while listening to this passage.

The mainspring of the plot is a murder - the murder of a railroad official who'd imposed himself on Severine when she was only 15; the murder is carried out by her husband, a decade of more after the fact. It almost takes place off stage. We know Severine and Roubaud are planning it, but the only glimpse we get of it is a fleeting one - the flash of the knife, a throat being cut - seen through a train window by a third character, Jacques. He thinks it was Roubaud. He thinks a hulking mass he saw in a corner of the window was Severine. But he can't be sure; the train was hurtling by at 80 kilometers an hour.

Zola hides the details of the crime until much later in the book, when Severine confesses her involvement to Jacques, who has become her lover. (Zola's treatment of sex - his willingness to talk about passion and naked bodies - is never more than R-rated but is still shocking to anyone who thinks of 19th century fiction as "Victorian.") The confession scene could be simple exposition, but it isn't: it becomes the chief cause of the climactic action. Severine doesn’t know it, but Jacques himself has long harbored homicidal impulses, and her confession has an unexpected effect: it whets his appetite for making his own fantasies a reality.

Throughout the book, Zola’s writing is powerful and naked, almost tortured. There are so many lost souls here, so many broken people. I’ve read that Zola was a determinist and a fatalist. Unlike the curses laid on families by the ancient gods, the families of Zola suffer from genetic defects. Whole families are infected, from generation to generation, by alcoholism, violence, greed, and lust. You might call it the Bad Seed school of destiny. I haven’t found that so obvious in the books I’ve read, where individuals seem to be cursed by no more than our common fate, that of being human beings with bewildering and contradictory motives, in a hostile universe. Despite the intensity of Jacques’ bloodlust, Zola treats him sympathetically: he struggles against the role fate has assigned him, and his downfall is pitiable.

As I said, Joyce gives a passionate reading. He is by far the brightest star among narrators who mostly record for their own company. The one odd thing about this recording is that there are no chapter breaks. Certainly the audiobook is divided into chapters, but the divisions are arbitrary, coming almost anywhere, sometimes (it seems) even in the middle of a paragraph. What I mean is that Zola’s chapter breaks are never announced. The book is read as if it were a single long narrative. It wasn't a problem as far as the pace is concerned, because the narrative races along like that out-of-control train. It was just a problem sometimes knowing where to stop and take a break. I always did that reluctantly.

Not for the faint of heart

Stunning, brilliant and deeply disquieting. Wikipedia, in its summary of the life and works of Emile Zola, has a whole section on him as an optimist. Look for that, perhaps, in his other writings, because there's not the least basis for that conclusion based on The Beast in Man. At the end of the book I struggled to find any character with any significant redeeming quality to counteract the inherent evil which permeates virtually all of them. I can think of one, maybe. If I had known how the plot would proceed I probably would not have read the book. It would have been my loss.

The narrator is terrific.

I've read 14 of the 20. and enjoyed them all. This one was the best yet. And, wow, the narration was superb.

A more egregious set of characters than this I have never come across in sixty years of avid reading. It has left me sickened and appalled