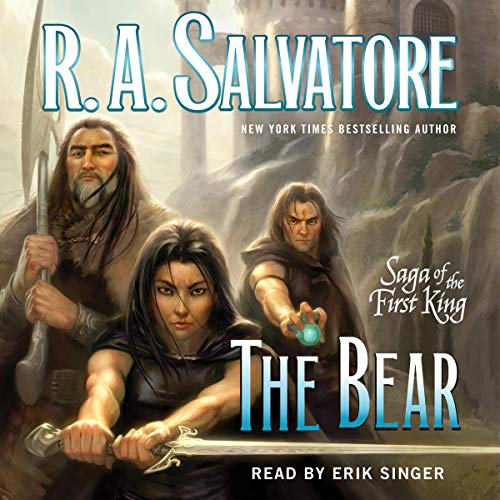 By: R. A. Salvatore
Narrated by: Erik Singer

The epic conclusion to New York Times best-selling author, R. A. Salvatore's sweeping series, The Saga of the First King.

The war of Honce drags on, and the roads and seas are littered with bodies. To everyone's stunned disbelief, Yeslnik the Fool has tipped the war's scales in his favor. The reign of the newly self-appointed King Yeslnik is already distinguished as the most bloody and merciless in Honce history.

Trapped, Dame Gwydre and Father Artolivan concoct a desperate plot to join forces with Laird Ethelbert, the lesser of two vicious evils. But Ethelbert's paid assassins slew Jameston Sequin and nearly did the same to Bransen.

Embittered by it all, Bransen seeks to extricate himself from the selfish goals of all of combatants. But in an odd twist of fate and crossed loyalties, Bransen sees in his old nemesis, Bannagran - the Bear of Honce and the man who slew his adoptive father - a darker image of his own heart. Allies and battle lines become tangled, motives indistinguishable as old friends become enemies and old enemies become allies.

The Saga of the First King

The Highwayman
The Ancient
The Dame The Bear

What listeners say about The Bear

A hurried end of the series

R. A. Salvatore's writer's skills are not on full display on this, the ending of the series. As with the previous book, it appeared that it was laid out in some semblance of moving toward a final completion but the actual flow was stilted with predictable interactions and outcomes. Bransen's continued bouncing back and forth on what his role should be seemed more to add words to the novel than engender any sympathy or understanding. Furthermore, his final battle sequences were like the Torch, the Flash and the Hulk sequencing in and out which came across as way over the top. In all, the series was good but I doubt that I will re-listen to this one.

From the first words to the last this work is a masterpiece. I've loved all of Me. Salvatore's books, but this is in my opinion his richest narrative; complex and filled with conflict both internal and external. It is equal parts adventurous, philosophical, passionate, and heartbreaking. Truly his finest art in a gallery of fine pieces.

One of R.A. Salvatores best that ive witnessed.

This was an amazing experience from start to finish. I've never been let down by R.A. Salvatore and this book did not disappoint in the least. I grew so attached that i didnt want it to end. It made me feel so many emotions from elation to sadness. If your a fan than this book is an absolute must.... well the entire series.

great story, MASTERFUL voice acting. erik singer is the beyonce of audiobooks. you would swear there were at least 3 different people telling this story

A great end to the Saga! Have always really enjoyed R. A. Salvatore’s works and listening to them from a great narrator like Erik Singer brings the world to life! I listened to all four books in a row and the story had me hooked from beginning to end! Thank you for all the hard work!