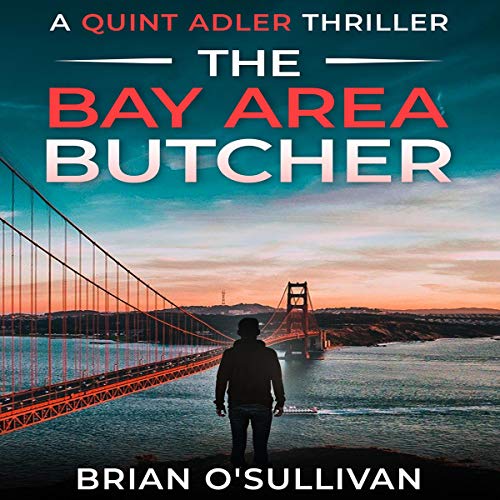 A sadistic serial killer brings Quint along for the ride....

After almost losing his life at sea, Quint Adler has been enjoying the downtime with his beautiful girlfriend, Cara. But the carefree days come to a crashing halt.

Bay Area police receive a letter. A man claims he’s about to start a killing spree that will go down in history. And he mentions Quint by name, drawing him into the case.

The killings begin and comparisons to The Zodiac abound, but it’s clear The Bay Area Butcher will surpass him in both victims and notoriety.

He continues sending letters, mocking the police, needling Quint, even giving the date that each set of murders will be carried out. It becomes an international story with The Butcher’s fascination with Quint at the forefront.

The Bay Area Butcher brings Quint face to face with the worst serial killer the country has seen in decades. Possibly ever.

What listeners say about The Bay Area Butcher

Bay Area Butcher is the second book in the Quint Adler series. I would suggest listening to the two books in order for background. Both this book and the previous (Revenge at Sea) are excellent.
This is a fast paced, edge of your seat mystery/thriller. Once I started listening I had to finish it. No breaks ! I had to find out how this story was going to end.
Adler is a journalist who can’t seem to keep himself out of his articles. But in this book the antagonist requests his participation in the hunt. The police aren’t crazy about this but want to keep communication with a serial killer open. The ending is rather twisted.
Liam DiCosimo does a great job narrating.
VERY HIGHLY RECOMMENDED!
If you found this review helpful please indicate so.
Thank You.

Be sure to count spaces between sentences.
A fun story that's easy to put yourself inside.
Recommended.