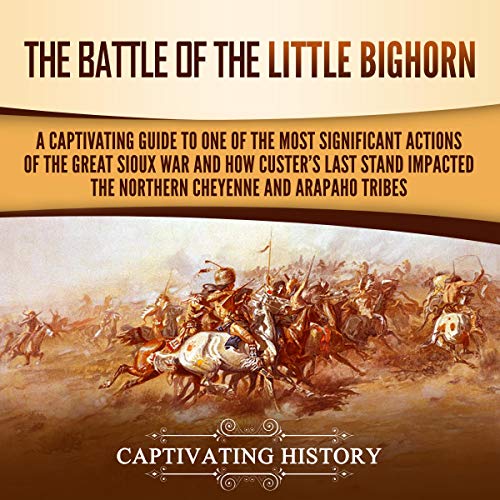 The Battle of the Little Bighorn

If you want to discover the captivating history of the Battle of the Little Bighorn, then pay attention....

The Battle of the Little Bighorn, which is also commonly referred to by American historians as Custer’s Last Stand, is one of the most iconic events during the Great Sioux War that occurred between 1875 and 1876. The war itself became widespread among other tribes within the surrounding regions of the Black Hills territory of present-day South Dakota after conflicts started between the U.S government and the local Lakota and Cheyenne tribes in 1854, which lasted all the way to 1890.

In this book, we aim to separate facts from fiction in regards to one of the most iconic battles during the American Indian Wars and provide the reader with a clear and fact-based interpretation of the events that took place prior to and during the Battle of the Little Bighorn, as well as its ensuing impact on both the Americans and the Native Americans.

In The Battle of the Little Bighorn: A Captivating Guide to One of the Most Significant Actions of the Great Sioux War and How Custer's Last Stand Impacted the Northern Cheyenne and Arapaho Tribes, you will discover topics such as:

So if you want to learn more about the Battle of the Little Bighorn, buy now!

What listeners say about The Battle of the Little Bighorn

Source, and beautiful to look at

Be aware that the author fills his book with detail to the point of entertainment....but it is countered by the richness of his prose.

Careful summary of the very dated data on the probable battle strategies; and very useful presentation of the characters behind the important players in this battle.

It's absolutely beautiful inside and out

This is a well investigated, detailed audiobook...and the actual events are seldom better than the stories.

There is a lot of pleasant detail in this audiobook about Custer's last stand. It is a very interesting audible, well researched, and greatly enjoyable.

If you want to read in-depth studies of American History, well researches the subject matter and well documents all the sources. If you desire to know the details behind the story, You seem like you better know the full story after you get done listening to his audiobook.

The author did an excellent job of explaining the various concepts for the manifesting of your reality in very easy to understand terms.

Having learned many books on the Little Bighorn battle, I consider this book to be the best overall the best because: Well written by a skilled writer. Difficult to put it down once you start learning.

About the Battle of the Little Big Horn. It was completely engaging and looked meticulously investigated. I would suggest it highly; it is an excellent case study on leadership.

Worth each minute of the listen. Must before visiting Last Stand Hill and surrounding area. Rich, captivating and compelling storyline!

New insights into Custer's movements and strategy are provided, and many of the important secondary characters in the story are given the depth they've been lacking for so long.

Well listen, great details and the history between Custer, Reno, and Benteen was interesting! Excellent!

The great detail about the history of the battle. Straight and honestly presented. The Indian view I equally acted.

I am impressed with his thorough analysis, which takes much more time than people hold, to bring the book, accurate based information in a fast-paced, highly entertaining way.

I understand this audiobook twice so as not to miss any information before going to the Little Big Horn Battlefield National Monument. Follow the maps in the book with you and you will surely be able to survive the past.

Its easy to comprehend the technique

As I am not a history buff, I conceived this audiobook was well written and remained cheerful everywhere. Really happy with this audible!

have learned in the last days and the fight. Indians fill in all the lost parts. Compelling, rich detailed eye witness tales. I got a lot more than I was awaiting. Incredible entertainment. My mouth went dry.

A fascinating and detailed,,

This AUDIObook is outstanding. The history of the West alone stands out and already and for all, we have an idea of the problems connected with Custer and our way of Native American Indians

This AUDIObook disputes that claim. It does seem that Custer's management was a lot braver than the rest off the soldiers. Surely tunning away and running was not a real step in the battle.

It would have hugely added to the experience. Certainly, shed light on a very complex and complicated person.

Lots of knowledge on Marcus reno and between. Couldn't put the book down. Gripping up to the time of Custer's conflict. The top never occurred! Very little information on Custer's battle, and the result. That being said, it's still an excellent book.