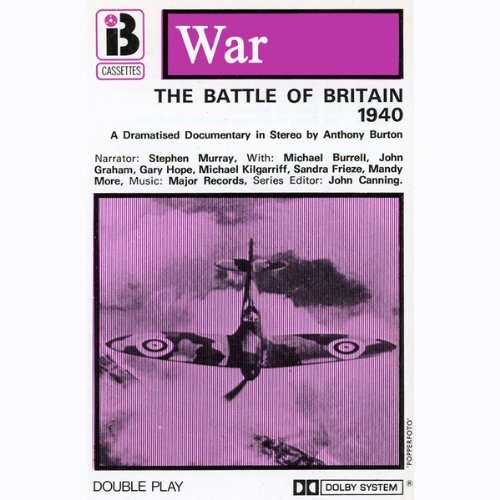 The Battle of Britain (Dramatised)

The Battle of Britain marked a pivotal turning point in World War II, handing Hitler the first major defeat of his chancellorship. At a time when the supremacy of strategic bombing was widely assumed, Britain successfully withstood the Luftwaffe invasion, relying on its vast industrial capacity, the radar-based Fighter Command system of Stuffy Dowding, and - most of all - the insurmountable cunning and bravery of RAF airmen - Winston Churchill’s famous "few". Here, erudite BBC radio stalwart Stephen Murray tells the story of Britain’s "finest hour". An ensemble cast of classic radio voices provide riveting primary source reenactments. From the gun-smoked skies of Dunkirk, to dingy London bomb shelters, to the hallowed halls of Parliament, these performances highlight the courage and sacrifice of Britain’s greatest generation.

France had fallen. All Britain waited for the inevitable German invasion. But first the Luftwaffe must destroy the Royal Air Force. It was the greatest air battle of all time against seemingly overwhelming odds. This programme follows the events of the epic weeks of the summer of 1940 and pays tribute to Winston Churchill's "Few" who saved Britain from the Nazi hordes.
©1980 Anthony Burton (P)1980 Ivan and Inge Berg

What listeners say about The Battle of Britain (Dramatised)

A first class production. Wish there were more in this series and longer! I've listened to it twice already!

little short, not much story, but its better than nothing! there are no WW2 dramatized audio titles, I'll take what I can get!

This story is always a good one, however, it was condensed down a little too much in my opinion. That said it wasxwell told and enacted.