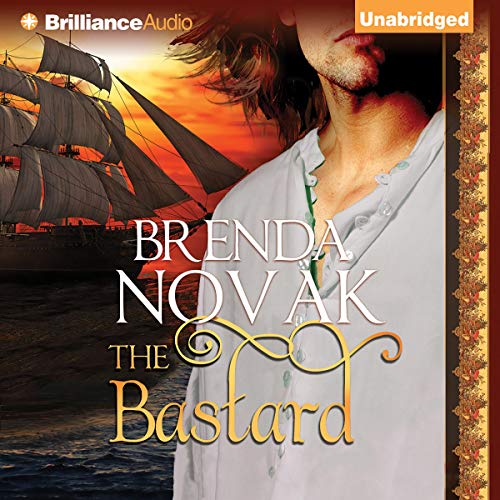 Jeannette Boucher, a young French beauty from a family left penniless by the revolution, must marry against her will to save them all from ruin. But almost immediately after the vows are spoken, she learns that her old English husband is impotent - and in his desire for an heir, he plans to compromise her in the worst way. Determined to escape such a fate, she stows away on one of His Majesty’s frigates. But a woman alone is in constant danger.

To Lieutenant Treynor, honor means everything…. Born a bastard to a wayward marquise, Lieutenant Crawford Treynor was given to a poor farmer to raise and was maltreated until he ran away to join the Royal Navy. Treynor is determined to prove he’s as good as any other man and rise to captain his own frigate. But once he finds Jeannette aboard The Tempest he must decide whether to return her to the man he knows would abuse her - or risk everything, even his life, to keep her safe.

What listeners say about The Bastard

Loved the story, but not the narrator.

Yes. But I might suggest they read it. I really didn't like the male voices the narrator created. I amost stopped listening to it because of it. The story, however, captivated me and I continued. Happy that I did because it's a very well written story.

the male voices all had a nasal / whiney sound to them. Very unappealing. I would suggest she work on them.

A very good story line. Kept me interested. Lots of twists and turns.

PAINFUL on the ears! But a GREAT STORY!

A differant narrator!!!! Its a great story but painful to listen to.

What was one of the most memorable moments of The Bastard?

Did Sarah Coomes do a good job differentiating all the characters? How?

NO NO NO NO NO!! I can't even express how awful it was. Ii wanted to hear the story but winced everytime a character spoke. The narrators speaking voice is pleasant but when she attempts voices they are slovenly, thick, painful slow and idiotic sounding. Its like all the characters open their mouths to speak and turn into drunken illiterate old men who have trouble breathing and speaking and are hoarse and spittle plagued.

I DID LOVE THE BOOK! The story in all aspects are splendid. .. but READ it... don't waste a credit or a dollar on the audio version!!!! Its such a shame.... it really is.

between over melodramatics and nasal sounds it often made me think this would be better to read without listening. The Kindle book title is Honor Bound.

oh my gosh. I read this book several years ago and enjoyed it. I thought I would like having it read to me by a professional narrator. I was wrong. the reader sounded like a British-accented Captain Kirk trying to overdramatize something. Some of the chapter breaks ("Chapter Four" for example) sounded like she was having an attack of the vapors, "Giles, get my smelling salts, won't you please..." Killed the whole story, for me. While I could tell some differences between the characters' voices, all the men -- most annoyingly the Hero's -- were nasal and whiny-sounding. He sounded almost petulant, the entire book. I will avoid this reader's performances in the future. Like the plague.

I would have liked this book much more without the narration, as always the audio never fits the characters.

Another good story ruined by a bad narrator

Omg this woman should never be allowed to narrate any book. Her voice of the hero makes him sound like a pompous feminine idiot, only a shade different than his mother's voice, and the heroine's voice is no better.

Oh, the story. Ms Novak has written a number of good romances and this is one of them.

Could not even finish the book, the narrator sounded like a screeching witch.

What was most disappointing about Brenda Novak’s story?

I wanted so bad to listen to this story, but i guess i'll have to read it!! It sounds like a great book.

A good story ruined by the narrator

I like the story. The narrator's voice ruined the character of the hero, Trainer.

Again the story was the most interesting aspect of the book. The sometimes sing song cadence of the narrator was pretty irritating.

Almost all the male voices sounded like the main villains voice.

Was The Bastard worth the listening time?

Yes, the story was worth the time, not so the listening. One would be better off reading the book.

Sarah Coomes has been added to my list of narrators not to listen to.

The Bastard was another great read by Brenda Novak. Jeanette is a young French woman who’s family was left penniless, after the revolution. In order to save them all from ruin, she must marry. She learns very quickly that her old English husband is impotent although he wants an heir. He is planning on compromising her in a terrible way. She decides to Stowe away in one of His Majesty’s frigates. Lieutenant Treynor was born a bastard and given to a poor farmer to raise. He was treated badly until he ran away to join the Royal Navy. He finds Jeannette aboard The Tempest and has to make a tough decision about what to do with her. I enjoyed this book and can’t wait to read more by Brenda Novak.

OK Story but the narrating is awful

What would have made The Bastard better?

A different narrator. She was absolutely terrible, over emphasising when it wasn't necessary, the timing of her speech was dire.

Would you recommend The Bastard to your friends? Why or why not?

Not with this narrator.

Get rid of the over performing narrator

If you could play editor, what scene or scenes would you have cut from The Bastard?

I only listened to an hour of the book and couldn't listen to the annoying narrator anymore, so I couldn't comment on this point

Does no one listen to these audio books before they go out for public purchase. I cannot believe that I am the only one that has a problem with the way this story was being read!