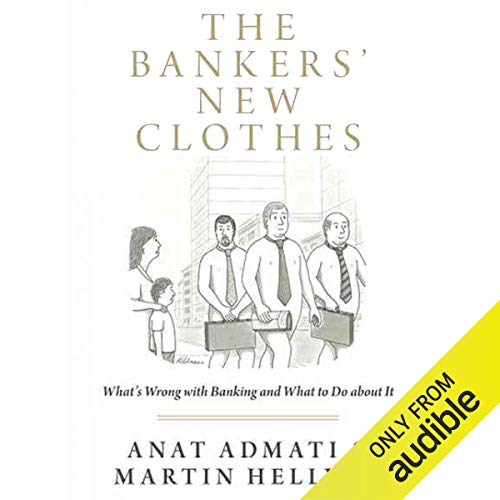 What is wrong with today's banking system? The past few years have shown that risks in banking can impose significant costs on the economy. Many claim, however, that a safer banking system would require sacrificing lending and economic growth. The Bankers' New Clothes examines this claim and the narratives used by bankers, politicians, and regulators to rationalize the lack of reform, exposing them as invalid.

Admati and Hellwig argue that we can have a safer and healthier banking system without sacrificing any of the benefits of the system, and at essentially no cost to society. They show that banks are as fragile as they are not because they must be, but because they want to be - and they get away with it. Whereas this situation benefits bankers, it distorts the economy and exposes the public to unnecessary risks. Weak regulation and ineffective enforcement allowed the build-up of risks that ushered in the financial crisis of 2007-2009. Much can be done to create a better system and prevent crises. Yet the lessons from the crisis have not been learned.

Admati and Hellwig seek to engage the broader public in the debate by cutting through the jargon of banking, clearing the fog of confusion, and presenting the issues in simple and accessible terms. The Bankers' New Clothes calls for ambitious reform and outlines specific and highly beneficial steps that can be taken immediately.

What listeners say about The Bankers' New Clothes

A very dry subject made facinating

Great book, persuasive and informative. Important reading for policy makers and citizens around the world.

Connecting many dots, but urges a particular view

Fortunately, the authors do raise arguments made by the banking establishment side of these debates, if only to give them short shrift and dismiss them. To that extent, it has enough intellectual honesty to keep me listening (along with its pretty comprehensive coverage). However, I would have preferred a more thorough exploration of opposing points of view. My perception is, this book does not hesitate at any point to tell me what I should think and conclude about these topics. I find I must filter it while listening in real time, considering and weighing the counter-arguments I know exist. Given all that, it is definitely a worthwhile expenditure of my time. It is good to see banking issues described around familiar accounting conventions such as balance sheet items.

So much good information, but ignore the evidence

The book is dense with information and explanation, but the authors can't give up the pipe dream that government regulation can fix it, in spite of all the evidence they vote that shows otherwise. Banks need to be able to fail and their leaders need to pay with jail.

This book illustrates an in depth argument and research against the financial industry as a whole and how policy and regulation currently interact and how they could interact in the future as opposed how they should interact. It was a great book, redundant at times although I could see the re backing of some arguments essential to get the over all message through. Needs a more energetic reader for the audiobook version! The current voice is extremely monotone. With that being said you must posses an interest in finance.

Very dry and academic but with a dramatic punchlin

Bottom line is we have taken no action to prevent another financial crisis because bankers own our political actors. The arguments to avoid regulation are flawed and self serving to bankers.

A good book on financial regulation.

The simple solution to a centuries old problem?

The book well describes some of the wrong incentives prevalent in the financial industry before the crisis and still today. It also offers one simple solution to fix all this in perpetuity. Whilst no one can know, if higher bank capital requirements actually would solve the problem of financial crisis and actually would come at no cost to society, there remain questions.
But it's well worth a read, even though the many permutations of Kate borrowing with guarantees from aunt Claire to buy a house on leverage become a bit lengthy at times...