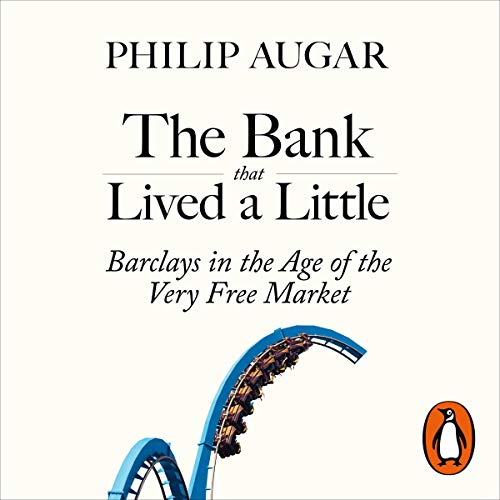 The Bank That Lived a Little

Barclays in the Age of the Very Free Market
By: Philip Augar
Narrated by: Jonathan Keeble
Length: 15 hrs and 32 mins
Categories: Non-fiction, General Non-Fiction
4 out of 5 stars 4.0 (3 ratings)

The Bank That Lived a Little

Penguin presents the audiobook edition of The Bank That Lived a Little by Phillip Augar, read by Jonathan Keeble.

Based on unparalleled access to those involved, and told with compelling pace and drama, The Bank That Lived a Little is the story of one of the most familiar names on the British high street since Big Bang in 1986. Philip Augar describes in detail three decades of boardroom intrigue driven by ruthless ambition, grandiose dreams and a desire for wealth. It is a tale of a struggle for long-term supremacy between rival strategies and their adherents - one camp desperate for Barclays to join the top table of global banks, the other preferring a smaller domestic role more in keeping with the bank's sober Quaker origins. This strategic disagreement continues to divide opinion within Barclays, the city and beyond.

This is an extraordinary corporate thriller, an inside chronicle of personal feuds, but much more besides: Augar shows that Barclays' experiences are a paradigm for Britain's social and economic life over 30 years, which saw the city move from the edge of the economy to its very centre. These decades created unprecedented prosperity for a tiny number and made the reputations of governments and individuals but then left many of them in tatters. The leveraged society, the winner-takes-all mentality and our present era of austerity can all be traced to the influence of banks such as Barclays. Augar's book tells this roller-coaster story from the perspective of many of its participants - and also of those affected by the grip they came to have on Britain.

What listeners say about The Bank That Lived a Little

This is a tour de force. It follows individuals and firms, yet constantly builds and illuminates a bigger picture. Personal themes build into stories of triumph and defeat (and sometimes, resurrection). It is all done with a deft, well-researched, intimate touch, and narrated in a fine posh English voice. Often I felt I was right at the elbow of the critical people, in the pivotal events. The various layers of financial innovation, firm governance, regulation, and clashes of culture and personality (and the demands of different eras) smoothly surface whenever suitable, forming threads throughout the story. American investment banker Bob Diamond personified the era in banking centered on here, and is the most central figure, but plenty of others find sharp portraits. Diamond's moves, motives and statements in triumph and defeat (and resurfacing) help shape the narrative arc.
Newsflash - now, in January 2019, a trial is about to start in the UK of former CEO John Varley, in relation to public communications made around the time that Barclays avoided a government bailout after the '08 global financial crisis. So it seems now (after many gripes especially from the left) a top figure HAS been brought to the bar over bankers' doings in those times. The back-story for this is extensively discussed in this book.

The focus jumps at various turns to a few side-stories. One figure is a fairly successful British small entrepreneur and borrower from Barclays (to start with), who was signed up (cross-sold or up-sold, as the marketing terms go) into a derivatives side deal alongside his business loan, and ruined by it (or by his own folly, depending on the eye of the beholder). Or rather, he would have been ruined, but for some compensation wrested from Barclays in a belated government intervention (but he lost that business along the way). Depending on the observer's perspective (from within modern finance or outside it), he took a risk and was rightly or else wrongly bailed out by government. Another player is a hedge fund junior partner-whiz kid who repeatedly reads events well and profitably. Also there is Amanda Staveley, who put together a capital boost for Barclays but wound up in litigation on it. We get a good tapestry here. The author is very good about having enough restraint in the telling, to allow each story to have its suspense and to appear in its various sides and dimensions.

Then there is a wider public: alongside the exultation of the creative entrepreneurship of the bankers, grows the parallel story of British businesspersons and small depositors and shareholders feeling very ill-treated. There is a great eye for things not said, or not said clearly enough, by various actors, in, say, board meetings, that had fateful consequences. Cultural differences between Americans' business talk style and the Brits', appears. As the story proceeds, and the global economy teeters, the banker's bonuses become glaring in public media, in a time when the public is hungry and told it must do without, all the while bailing out the (infrastructure controlled by the) still-rich financiers (and seemingly maintaining their posh lifestyles and pay-packages). The mob gets restless and the regulators are prodded to further action. At length some heads must roll. Echoes of this can be heard today in politics and all over the Internet, here in the USA too. The story is a central one in recent British history.

I appreciate the author keeping focus (and even, perhaps, upping his game with lucid strategic descriptions) through more recent years, as the era again began to shift out of depression-style penitence, and the global gameboard again shifted post-2008. The last hour or so of the book is splendid. Theresa May comes in for mention, though Brexit (hanging fire as I write this in December 2018, but long seen coming) gets not a whisper. I guess that is a different book. But it seems odd, given his book straddles that period.

This is a good read on the history of Barclays and what went wrong in relation to board oversight and the uncontrolled greed of the senior management and traders. It sets the scene of the banks heritage and does a nice job of bringing back the memories of the bank bailouts and is timely given the court cases currently underway. However, the more recent history doesn't leave great comfort that the lessons have been learnt.

The author tackles some of the mis-selling cases and the damage done to the Barclays brand, but doesn't really answer the question of why more of the individuals involved are not under criminal investigation or been made to return their excessive remuneration packages. Whilst this has been covered in more general banking world, it would have been good to see this from the point of view of the characters at Barclays, who you get to know well throughout the book.

Starts very slowly, and never really gets into enough detail to be truly insightful or captivating. Still, it's an interesting read.

While I enjoyed the book, it was not as insightful as I wished. Alot of the book is dedicated to the turbulent times of the Great Financial Crisis and it's aftermath, I feel anyone who followed the news during this time will learn little new.

Knowing very little about banking this book was very insightful. The quickest I’ve ever listened to a book.couldn’t stop listening.

The Bank that lived too much or too long ?

A detailed, well sourced, and at times atmospheric story of the UK’s most newsworthy bank in recent times. Dryly written, it manages to balance the multiple players and perspectives without bias or judgement, allowing the reader to completely decide where responsibility lay. A few things shine through: 1) the emphasis on the spellbound board and non-execs - whose understandably flawed and wishful thinking sustained a bloated investment bank which in hindsight only served its senior massively overpaid (deluded) management. 2) the archaic and sub optimal institutional structures across various Regulator’s whom were unable to keep up with and often fail to understand (until far too late) the excesses of the Bank’s activity - and then mis-prescribe the “cure”. Finally, the sense of history repeating itself as Barclay’s current 0.5x book valuation for a transatlantic full service bank struggles to win over shareholders, again! A big round trip up to 700p, and now at 150p really says it all, with the standalone Investment bank valuation likely negative ...hence more chapters to come!