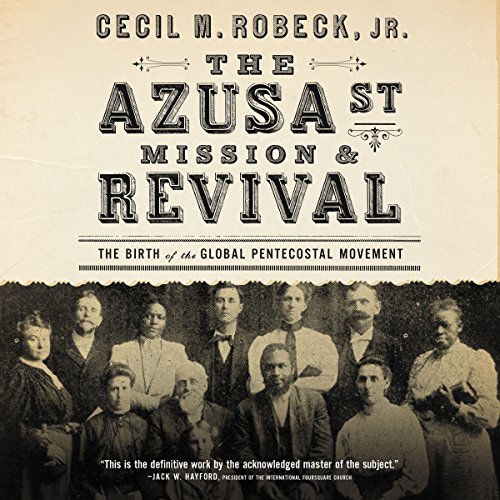 The Azusa Street Mission and Revival

In Azusa Street Mission and Revival, Cecil M. Robeck Jr. brings to bear expertise from decades of focused study in church history to reveal the captivating story of the Apostolic Faith Mission in Los Angeles, which became known as the Azusa Street Mission. From humble beginnings with few resources, this small, uniquely diverse, and inclusive congregation led by William J. Seymour ignited a fire that quickly grew into a blaze and spread across the world, giving rise to the global Pentecostal movement. Sifting through newspaper reports and other written accounts of the time as well as the mission's own publications, and through personal interaction with some of those blessed to stand very near to the fire that began at the mission, Cecil M. Robeck Jr. not only relates the historical significance of the revival but also captures the movement of the Holy Spirit that changed the face of modern Christianity.

What listeners say about The Azusa Street Mission and Revival

very good but for some mispronuciations

A very good book, even if a little idolatrous of Seymour. the reader did mispronounce a few unusual words

A steady review of the Azusa Street Revival. The use of newspaper articles and written accounts of the day is skillfully used to convey the very human intricacies of the movement. An enjoyable and informative piece, and a must for anyone hoping to play a part in stewarding revival.

Excellent. Unique. Stunning. A must read.

see the above. it changed my life and filled in many blank areas of my understanding.

I absolutely love this amazing piece of history!! And I love how the author asks questions to the readers, and you think and assess the situations referenced, and it leads to prayer. LOVE LOVE LOVE!!!

This was not the typical signs, wonders, miraculous account of Azusa Street. This book, with its historical detail, looks into the behind scenes of this revival moment in time. I believe studying this insight helps us to gain a glimpse into the reality of the day to day human account and response to such an supernatural time. I took away from studying the thoughts, deeds, and actions of this previous generations reaction to GODS movement in their midst. How in an era of racism, the true reviving love of GOD brings unity. But also, how the pride of man wanting to be elevated brings division. How a mature lover of GOD responds, placing first, 1 Corinthians 13 sacrificial love in place over opinions, wants, needs, oppose to the immature lovers of GOD who allowed greed, and selfishness breeding division ultimately bringing an end to this miraculous move of GOD on this earth. A must read to learn from and cultivate a people mature enough to handle the next great move of GOD!

Well-balanced and well-researched. Packed with insights on the conflicts among the forerunners of the Azusa mission revival.

So enlightening... and sobering

This book allows us to see inside a move of God that changed the world in a profound way. The author has done good research that gives details into the souls and mindsets of the key people. Sadly one sees how man’s inherently carnal nature affects what begins as a genuine move of God. Nevertheless I honor these precious souls who gave birth to a revival resulting in a gift of the Spirit that benefits us greatly. Such a gift is precious, enabling us to live in closer and deeper relationship with Jesus Christ.

I do not come from a Pentecostal tradition and to be honest wasn’t sure what to think about it. However, God has been stirring and being led by the Holy Spirit into a closer relationship with Him. This work was an excellent source of insight as to how God stirred then and what He might do again a little over 100 years later. Moreover, the author paints a brutally honest picture of what began in 1906 and the celebrations and hardships along the way. Pro tip: do yourself a favor and listen at least at 1.3 or higher. 1.5 was perfect for me to listen, and reflect.

Two things astounded me about this book. One; how much I had learned over the past 40 years about the Azusa Street history without Robeck's book. Two; how very, very much I learned BY Robeck's book. Excellent and Riveting!

He ran together sentences throughout. No breaks most of the time, like he was in a great hurry to get through the reading.

Would have loved if he would have dug a little deeper by getting familial stories because it seemed a little repeated I. The conversation about Seymour’s relationship with the woman that started Portland’s mission. Great history! Great book!