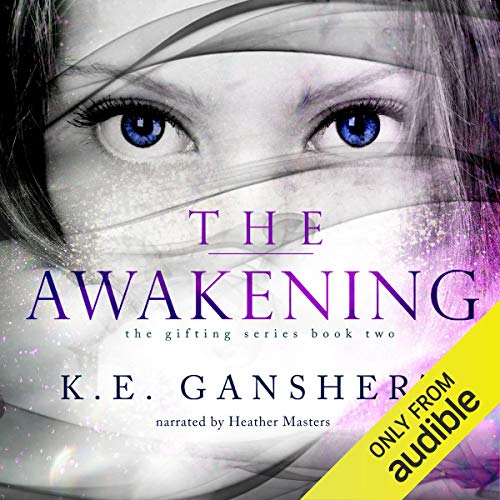 Tess Eckhart isn't crazy. She's not suffering from psychosis. She and Luka Williams are part of The Gifting. Before they can find out what that means, the man with all the answers turns up dead. The only thing he left behind? A few patient files that lead to the nation's most lawless city.

With authorities chasing them, Luka and Tess escape into the very heart of peril and against all odds, find an underground community of people just like them. They aren't gathered together for the sole purpose of survival, either. They have a plan and a purpose - to awaken as many people with The Gifting as possible. It's dangerous and deadly work. Tess wants to help. Luka is desperate to keep her safe - a task that proves increasingly difficult as Tess's gifting comes to light.

Could Tess Eckhart be the One they've been waiting for? The One who can save them all?

it had just enough plot to keep me interested but not enough to make it awesome. there is a lot of drama with tess and Luca. .. and a lot of self doubt with tess. it got a little old. I'll keep listening to book three to get the rest of the story but more because I like having something to listen to rather than because I'm riveted.

Uuuggghhhhhh!!!!!!! I really enjoy these books....BUT, the willful stupidity and ignorance of our heroine makes me CRAZY!!!!!! I honestly think these books are entertaining enough to listen to once but there’s no way I’ll be doing so more than that due to how frustratingly stupid Tess is over and over again. I hate wanting to bitch slap the main character on who’s basic common sense the success of the big mission hinges😩🙄🤦🏻‍♀️

WANT SOMETHING TO ESCAPE INTO...READ THIS SERIES.

My only issue within the story is the horrid breakdown in communication. A son born to a King is bred from birth to become King. Tess was not bred nor nurtured with her people. So for me I completely understand wanting to do more. Plus at 17 years old you think you are invincible.

I am looking forward to diving into book 3.

Great Continuation of the Series

Overall Assessment:
This is the second book in ‘The Gifting’ series by KE Ganshert. This book picks up almost immediately where the first left off. I liked the first book quite a bit, but this one was even better! Tess is finally growing and gaining some confidence. I emphasize some because she still has a long way to go. I guess I should warn that there is a pretty big cliffhanger–but honestly, if you’re not into cliffhangers I’m not sure why you would risk reading a series. The final book is already out so you won’t have to wait long to find out what happens.


What I liked:
– Tess’s growth – emotional and her abilities
– Finally some answers! We learn about what The Gifting is and the different kind of abilities.
– This book was action packed from beginning to end! The first book got a little slow in the middle, but this had none of the filler stuff that the first one had.
– Awesome new characters (minus one annoying Mean Girl on steroids). I’m hoping Ganshert expands a little more on these characters, I want to know their stories!
– The cliffhanger! I know, most think I’m crazy, but I really like cliffhangers. Especially when the next book is already out :p

What I didn’t:
– The turmoil in Tess and Luka’s relationship was a little much. It annoyed me that Tess continued to leave Luka out of everything.
– We basically get another Summer in this book, but worse. Ugh
– The last thing that bothered me was when Tess and Luka find the ‘Hub’.

I find it hard to believe that they didn’t ask questions, no-demand answers – about the Hub when they first arrived. Why would you allow yourself to go into a big warehouse with a bunch of strangers and let them feed you information as they see fit? I would have been demanding answers to questions like “what TF is the gifting?”, “What are fighters?”, etc. right away. It was irritating to even read.


Would I recommend this book to family and/or friends?
Yes, and I will be continuing the series

Katie Ganshert has done an amazing job with this series. It truly captures your heart and keeps you coming back for more. It's so refreshing to have clean fiction to read that embraces the beauty of a love story, while keeping the suspense and mystery at an all time high. I love that she approaches this with a dystopian tone that mirrors biblical truths throughout. The creativity behind it is astounding and I highly recommend it for your next read!

Since the Divergent series I have been looking for a series with strong characters. This series accomplish that, it is a great story. The second book is much better than the first one. I can wait to listen the third. Very good narrator as well.

Although I'd already read this book two months earlier, I loved it so much that I jumped at the chance to hear it narrated in Audible. K.E.Ganshert's second book in 'The Gifting' series has all the elements of a good story and I couldn't put it down on first read. Just loved how Tess grows into her own person and blows everyone away as she realizes her potential. It was fun seeing the reactions of everyone who'd overlooked her. Love the romance, Link and Luka, and the underlying messages of the story too.

The narrator, Heather, did an amazing job of bringing this well-crafted novel to life. She expertly switched from character to character without breaking a sweat. It made for a very enjoyable experience, and I loved the convenience of having someone else read to me while I did housework. We'll done all around!

I fell in love with these books right away and have read them through ebooks, paperback and am now enjoying the convenience of listening! K.E. Ganshert is a truly "gifted" 😉 author. This series has become a bit of an obsession for me. I love the narrator, she is what I imagined Tess sounding like. I liked listening to the book at 1.25 speed, just my preference. The series just keeps getting better! You are sure to get hooked. I can't wait for the third book to come out on audible.

There was so much angst and emotion, it was irritating to listen to. Most of the book was how Tess thought she wasn't worthy ect.
What little action and learning we did about keepers and fighters was truly interesting however, if I had to hear another word about Luca or Tess biting their thumb nails I would have gone nuts!!!
Don't get me wrong I'm going to read the last book but this book would have greatly benefited with less angst and more action or showing Tess and Luca getting closer and learning their skills rather then the drifting away moodiness that dragged you down.

wow o wow what can I say about this book. I'm in awe that I have had the opportunity to listen and review this book.
What can I say about this book.
There is so much that I have going on in my head that I would like to say but getting it into words is the hard part.
After The Gifting I was left wondering what was going to happen next, What powers does Tess and Lucca have, how will living with other change them.
Meeting others and learning from them changes everything for both Lucca and Tess. To find out that there is a reasoning to your powers and what you are capable of doing with them is a relief for Tess but adds more stress to Lucca.
What will happen next? I can not wait to read on with the series.
I love how this is a book that I can share with my children.