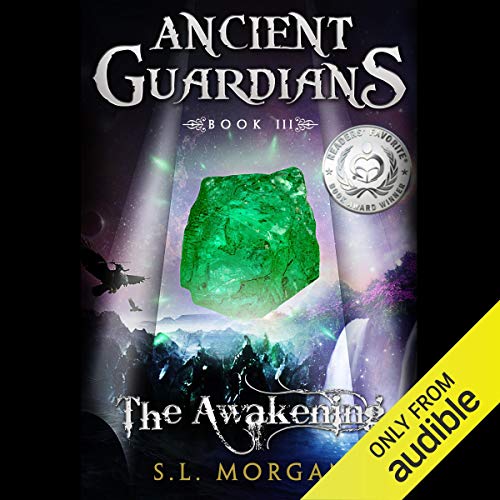 In the third book of the Ancient Guardians series, The Awakening, everything will change! Treaties will be broken.... Mysteries will be exposed.... Lives will be lost.

As the new emperor of Pemdas, Levi begins restoring hope to the grieving lands and the people who lost so much during the battle of Armedias. With the healing initiated, Levi moves quickly to make Reece his wife. Not long after their enchanted wedding, the appearance of an enigmatic man coincides with newfound supernatural powers in Reece that she and Levi struggle to understand.

But nothing could have prepared either of them for when the impossible is revealed.

Emperor Navarre is alive in another galaxy!

Tensions grow, and questions abound for Levi, Reece, and the Guardians as they race to embark on their dangerous new quest, but throughout it all one thing is made more and more clear to Levi: the Guardians have vowed to protect the Key, and now the Key must protect them.

Enjoyed this series. A little upset that I can’t get the next book as audible

this is a great romance book. lots of gentleman chivalry. not a ton of action except towards the end of the books. only problem for me is the over use of the descriptive words.

writer S. L. Morgan is a great author. Natasha Soudek is a wonderful narrator. The story is very emotional and loving.

book 3 picked up the pace

enjoying the break from research. Feeling enchanted, loving the escape!
The story line can get a little long winded, but does pick up speed soon enough. narration is very good with the exception of Levi. He sounds angry and unattractive. I have to replay his words with my own version. This works just fine. Looking for the next book....

Loved it, great characters and story ! Can't wait for the next book!! I'd recommend!

where is next book

so far all three have kept me on edge of my seat. loved them.all. where is book 4

A wonderful and exciting story

I love this series. This book didn't disappoint. I know the 4th book hasn't been out in print for very long but I do hope the audio version comes out soon. My favorite part was the wedding of course. It was described so beautifully.

The narrator performed wonderfully. The differences in the characters were distinct. Please put the 4th book out soon in audio.