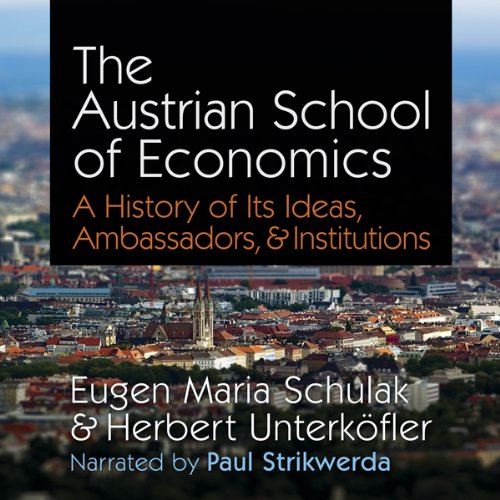 The Austrian School of Economics

The Austrian School is in the news as never before. It is discussed on business pages, in academic journals, and in speeches by public figures. At long last, there is a brilliant and engaging guide to the history, ideas, and institutions of the Austrian School of economics. It is written by two Austrian intellectuals who have gone to the sources themselves to provide a completely new look at the tradition and what it means for the future. This is the first such authoritative book that has appeared on this topic. The Austrian School of Economics: A History of Its Ideas, Ambassadors, and Institutions, by Eugen Maria Schulak and Herbert Unterköfler appeared first in German. It has been a sensation: the first and most authoritative source on this hot topic. This new English translation, complete with a vast scholarly apparatus of citations and bibliographies, is academic at its core but also easy to read, entertaining, and fascinating on every page. The authors set the stage with a discussion of the culture of 19th-century Vienna, and the striking innovation that came with Carl Menger's subjective theory of value. They discuss the titanic struggle over method that took place between the Viennese Mengerians and the German Historical School.

Next comes a thrilling account of the second generation of Austrians - their politics, their theories, their personal splits, their idiosyncrasies, their debates. The cast of characters here is far larger than most people in the English-speaking world have known. The authors operate as tour guides to a world that is mostly unknown to Americans due to the remoteness of time and the differences in language. If you are like many people, you have been curious about the Austrian School but didn't know where to turn to discover more about it. This book is the one that makes sense of it all!

What listeners say about The Austrian School of Economics

Good book about Austrian Economics and it's histor

If you are looking for a book on Austrian Economics and the history of it this is the book for you.

It seemed to me that it was a long list of footnotes, book titles, and professors. By chapter 3 I still had not learned anything useful. it may help a student who needs to know who wrote what and when for an exam.