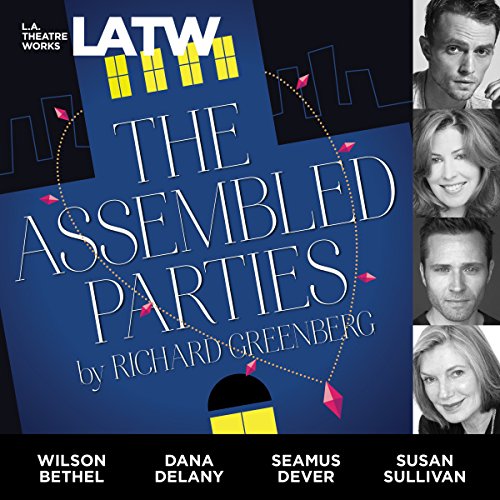 It's Christmas 1980, and inside a sprawling Upper West Side apartment, Faye Bascov is about to throw an opulent Christmas dinner - a tradition for this secular, well-educated Jewish family. But any family gathering is an invitation for old resentments to boil over, as Faye's sister-in-law Julie and the extended family have plenty to hash out. Flash-forward to 2000, and the apartment, now much shabbier, reflects how the family's fortunes have changed, and the Bascovs now have to reckon with the legacy of their family discord.

Recorded in Los Angeles before a live audience at The James Bridges Theater, UCLA in November of 2016.

What listeners say about The Assembled Parties

Not sure why this play won so many awards....

Ever watch or hear a play and wonder what all the fuss was about? Well, that’s how I feel about this one. Maybe it’s because the theatre going public at the time was just ecstatic to see a play that was not a remake of The Ljttle Mermaid or Spider-Man but this play fails to create a sense of wonder and truth that great plays do. Now I did appreciate the sense of place and the witty Yiddishisms and the capturing of a certain now bygone era of New York I used to know. However I found the ending absurdly too perfect, it was difficult to know who was who and I especially found the role of the mother, the former movie actress, to be entirely unbelievable and annoyingly too precious. What makes this play however worth experiencing is the pitch perfect performance of Susan Sullivan as the kvetching, pill-popping Faye. I knew women who were witty, self-deprecating, unsolicited advice dispensing like Faye years ago in New York and this play memorializes then with great affection and authenticity.