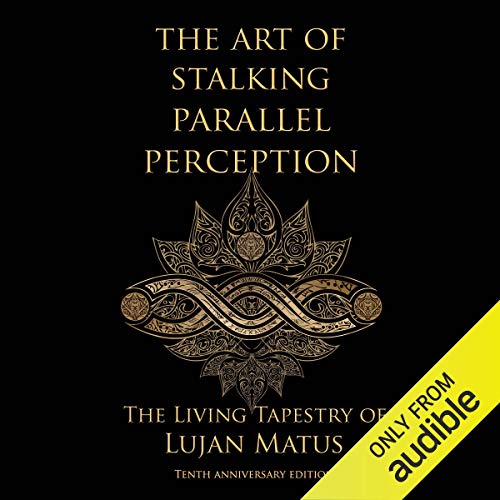 The Art of Stalking Parallel Perception is a new kind of autobiography - an interdimensional odyssey that weaves its magical threads through one's own existence in a way that has to be experienced to be believed. In this revised edition, Lujan clarifies and expands upon key elements of his teachings. Listeners familiar with the original will be surprised at the awakenings that unfold via powerful additions woven throughout the text. Some chapters have been removed, others expanded upon, and exciting new material has come to light.

Throughout this book, we accompany Lujan Matus during pivotal journeys on his path to becoming a shaman. With in-depth explanations, he and his benefactors impart an empowering sequence of transmissions that offer unprecedented insight into the intricacies of human existence. In sharing his experiences, Lujan opens the door to a universe of mythical proportions and bestows vital keys to access these dimensional possibilities in one's own life.

The Art of Stalking Parallel Perception magnifies the essence of the ancient wisdom traditions in a functional, non-dogmatic format that speaks directly to the heart. One may recognize strands of Tibetan Dzogchen and Taoism, and aficionados of Toltec wisdom will discern the unmistakably potent voice of Don Juan Matus and discover the mysterious guiding influence of the ancient seer, Xoxonapo.

With direct language, Lujan conveys an otherworldly grasp of human nature, not to mention coherent accounts of interdimensional travel, a precise description of the enigmatic manifestation of the energy double, insights into the nonlinear nature of time, and the elucidation of hieroglyphs that are maps to completely open one's perception, this is a bridge to new thresholds unlike any other.

What listeners say about The Art of Stalking Parallel Perception: Revised 10th Anniversary Edition: The Living Tapestry of Lujan Matus

The more you read, the more is revealed

Would you consider the audio edition of The Art of Stalking Parallel Perception: Revised 10th Anniversary Edition: The Living Tapestry of Lujan Matus to be better than the print version?

I have read the original version 4 or 5 times and decided to purchase the audio addition of the updated version as it was considerably cheaper. Listening to this book allows you to silence your mind and just listen, I gained insights and understanding I did not have previously reading the book. I listened to it 3 times in a month, and each time gained new understanding. I think you could listen to this book 20 times and still learn something new each time. I have read many many books on Shamanism and 'Enlightenment', but Lujan Matus books are the most practical and honest that I have had the pleasure to read and apply practically. A must, but not for the faint-hearted.

A fascinating journey deep into the psyche

I loved the way the story ran parallel to the exploration of the psyche by way of the shaman. Interesting and engaging.

Living in the light

Once we have attuned our consciousness.....Living in the light, with a purpose. This parallel perception is an amazing experience. The tapestry of good vibrations....

Unparalleled!! clarity and depth of insight

I can't even begin to describe Lujan's influence in my life, and in particular this book. I rarely leave reviews, but when this book found me it literally reached into my life and rearranged my energy and the way I see the world. At times I felt fearful for no apparent reason. I know now that this was the fear of the ego beginning to witness its grip die and fall away. This book is highly cerebral. I needed a dictionary nearby and many times went back and reviewed chapters more than once if my attention had not been totally engaged while listening, it would slip right past me. It really needs to be listened to in a meditative state in order to assimilate the vast wealth of knowledge that comes through this man. I have a library of probably 600 audiobooks, and this teacher is without a doubt the absolute artist when it comes to jamming incredible depth into such a limited medium of communication such as language. I could and can feel his presence in my life. I can't say enough. The single most fascinating book from the single most amazing teacher I have ever encountered. Blown away

When you are ready the teacher will appear!

It is synchronicity that led me to this book. I believe those who are looking at this book and thinking of downloading it are being guided by their higher selfs. You Will not be disappointed. There is so much reflective information that I will probably have to stop and listen multiple times to absorb it's intensity. It is a must read and I feel words cannot describe its power on the soul.

Truly a perception altering book. as I listened to it for the first time I felt a sudden and heavy pressure in the back of my head and neck. for a short time after this, I had experienced an incredibly high vibratory state. since then I have listened to all of Lujan's books and have purchased 3 of his physical books. I have been immersed within in the self help & spirituality for some time now but there is no equivalent to the masterful accounts of Lujan Matus.

the books starts out slow, but midway I encountered a shift of mindset and the journey began. I look forward to more of the same while on this new path of consciousness.

If you are searching for meaning and answers to completely transform your life and "see" the bigger picture this sacred text is the way. To all my brothers and sisters on the path I hope and pray our energies meet and transform our realities.

Definitely a worthwhile read. Unconventional wisdom. Emphasizes the importance & benefits of Silence as a walk of life. Spiritually insightful beyond my ability to effectively convey here but I expect to perceive differently & grasp more deeply w/each read. I've listened 3 x in a row already & sure to read it again & again. This is a keeper, you won't regret adding it to your library.

A different perspective and explanation on what keeps our attention here(in form) and what can be done to change that.

I will be buying the hard copy book.

Hundreds of reads in this genre, this is a top ten.

OK, the narration was far from optimal.

My advice while going through the reviews is to be aware that this is adept knowledge. Those saying that this book is nothing but babeling saying nothing but just gives the impression of knowledge, probably could not comprehend the text. No disrespect to them, they probably mean well. But from me as a self-proclaimed adept, only the highest recommendations for this book. This Shaman rips the matrix apart, piece by piece

I felt it was a bit of a rip off of Castanedas book. The story was boring and distracting, I found about every 30 seconds of a chapter was something worth hearing. However toward the end, around chapter 13 to the end, I found really valuable. It almost seemed like a new book. And I'll listen to those chapters again and again.

I read the negative reviews so was skeptical. Started a bit wordy but at a certain point POW it broke through my skepticism. This book is so informative it engenders multiple listens. I had to rewind numerous times to assimilate what was being said. Before ive even finished i bought two more of his books and wrote this review. Good luck on your journey my friend