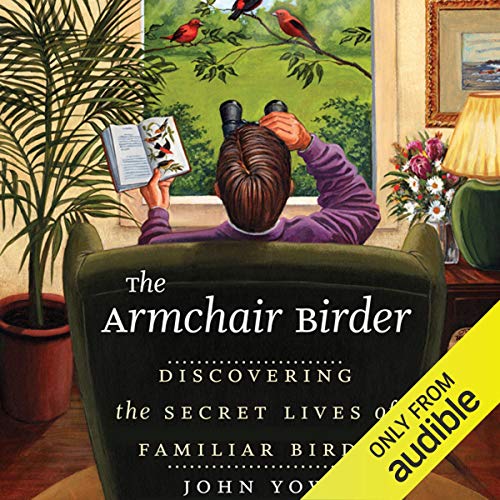 While birding literature is filled with tales of expert observers spotting rare species in exotic locales, John Yow reminds us that the most fascinating birds can be the ones perched right outside our windows. In thirty-five engaging and sometimes irreverent vignettes, Yow reveals the fascinating lives of the birds we see nearly every day. Following the seasons, he covers forty-two species, discussing the improbable, unusual, and comical aspects of his subjects' lives. Yow offers his own observations, anecdotes, and stories as well as those of America's classic bird writers, such as John James Audubon, Arthur Bent, and Edward Forbush. This unique addition to bird literature combines the fascination of bird life with the pleasure of good reading.

What listeners say about The Armchair Birder

I very much enjoyed the book. In fact, I am inspired to get a feeder for our small urban garden. We have many of the same species he discusses.
With all that, why 4 stars rather than 5? My only critique is that instead of numbered chapters, I'd like titles of each section to be whatever bird is discussed in each part so I can go directly to that part of the text as a handy later reference.

I do love birds, having been a birder for close to 30 years. Just ask me any day if I want to go birding, and I will grab my binoculars and (now) my camera and we will be off. After you bird this long, you don't see many new ones, so you become more focused on their behavior--you can't help it. So this book seemed right up my alley and I jumped at getting it recently.

As I listened, I became convinced the author was narrating the book as no narrator could be that good at capturing an author's personality, but I was wrong. Narrator Kevin Young is THAT good. Most of the time, I felt I was sitting in an Adirondack chair on author John Yow's lawn or porch, sipping iced tea and listening to him enlighten me on his sightings and discussing his various local bird's behaviors and personalities.

The author does tell a bit about his own observations of his local birds, but he has done his research and quotes and uses much information from well-known bird enthusiasts such as John Audubon and others. He discusses mostly eastern birds, many of which do not frequent my area, but it doesn't really matter to me as some of them have western counterparts who are quite similar, I assumed.

This is a very easy and lighthearted listen which can be easily picked up at any point as you progress. With a great narrator and chock full of fun and sometimes surprising facts and anecdotes, it is a winner in my opinion.

What did you love best about The Armchair Birder?

John has done an excellent job of making a documentary on familiar birds interesting and enjoyable. I both have a signed copy of the hardback as well as the downloaded audible book. Imagine my delight when I learned that Kevin Young performed the audible edition. Kevin always makes you feel that he is the actual author as he speaks any text with a tone that is so authentically engaged that you also become engaged. Well done both of you!!

The best thing is everything in my opinion. John's writing style is fluid and so very descriptive. Each bird has a separate essay dedicated to it. One bird, or one chapter, is easily read just before bed. An excellent way to wind down the day.

Each time I read the book, which has been two or three times a year since I first purchased the book in its hardback form (I imagine it will be more often now that I have the audible version as well) I am caught up again and again with the very first story about the Carolina Wren.

The audible form is a satisfying listen. John Yow's words in Kevin Young's voice is a perfect collaboration. You will be tempted to listen all in one sitting. (in fact, you'll most likely enjoy it over and over again) but chapter at a time is also enjoyable. Because these are separate essays, there aren't an army of characters to get to know, no plot to build up to, and if you're interrupted, fear not, it's a short rewind to start a chapter over again.

I was so pleased the book was narrated by Kevin Young. John Yow's book deserved a good narrator. I love my hardcover book and was so afraid the audible version would let me down. But, much to my surprise, I was lifted even higher on the wings of the birds I love so much.

I loved it. Fascinating to hear all about the habits and behavior of the everyday birds surrounding us. Great book

All familiar birds to those of us in the Southeastern US. Interesting stories and facts. Every time I thought to take a break, a new bird was introduced that I wanted to hear about.

Yow is the Bees Knees

"The Armchair Birder" is about a niche topic that is written so well, and with such charm and wit, it would captivate the most bird-indifferent imagination. For birders, especially the casual and recreational, Yow is the bee's knees.

The great thing about Yow’s book is that it’s all about familiar birds—what we see and hear about everyday, not the exotic: Bluejays, woodpeckers, mourning doves, eagles, wild turkeys, owls.

The anecdotes alone make for a memoir not soon forgotten. Yow talks about bird feelings and behaviors—you'll recognize some personalities from your own human family! It was as if the birds themselves were talking to Yow and sharing all their secrets.

I learned some things, but it really wasn't that interesting or informative. I was hoping for some more in-depth information in story form. This was a series of rather shallow short vignettes.

Reading this book is like being stuck in a boring conversation with someone rambling on and on about their hobby but never saying anything useful or interesting. The author also feels the need to give his political opinions. Don’t waste your money or time on this book.

The writing is wonderful, the stories are wonderful, and you will learn a lot. I really enjoyed it.