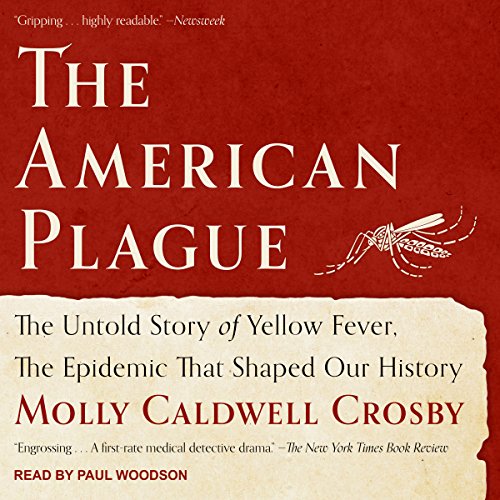 Over the course of history, yellow fever has paralyzed governments, halted commerce, quarantined cities, moved the U.S. capital, and altered the outcome of wars. During a single summer in Memphis alone, it cost more lives than the Chicago fire, the San Francisco earthquake, and the Johnstown flood combined.

In 1900, the U.S. sent three doctors to Cuba to discover how yellow fever was spread. There, they launched one of history's most controversial human studies. Compelling and terrifying, The American Plague depicts the story of yellow fever and its reign in this country - and in Africa, where even today it strikes thousands every year. With "arresting tales of heroism," it is a story as much about the nature of human beings as it is about the nature of disease.

What listeners say about The American Plague

Yellow fever ravaged Memphis, peaking in 1878. The city went from a population of 47,000 to 19k in months. This book covers its origins in Africa, describes daily living, medical care, churches, and the deaths and burials of the victims.
The epidemic sparked a virologist coordinated lead team which tackled the disease. Walter Reed was a leader during the research. My great 3x grandparents and 6 other relatives died in the epidemic and are buried together in a family plot.

This book has lots of good information, but I found it hard to follow at times and easy to forget who some of the characters are. I would have liked to listen for an hour or less at a time, but that made it harder to follow. I ended up listening over a few days and just pushing myself to finish. It felt similar to studying for a class. I learned a lot from this, but I think it could have be much shorter.

Loaded with info and well presented

I have not heard the story of "Yellow Fever" before. It was good to learn new data and it's history..

I was naturally intrigued by this book given my experience with mosquito-borne and other infectious diseases. Loved the simplicity in writing and the clarity of its narration. Well done!

Many books do not lend themselves to abridgment, their every word being important and necessary to the story while others are needlessly long. This book is the latter.