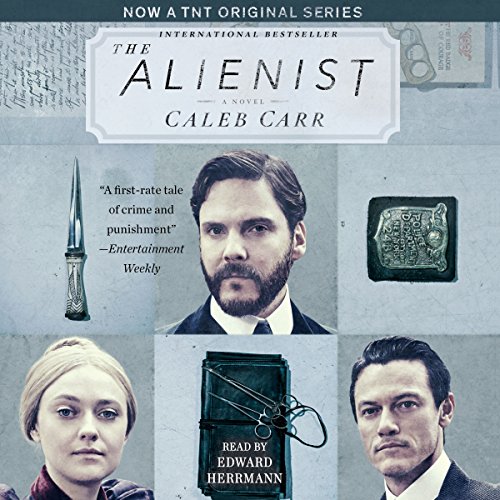 New York, 1896: Reporter John Moore is summoned to the East River by his friend, psychiatrist Laszlo Kreizler, a brilliant pioneer in the new and much-maligned study of society's "alienated" mentally ill. At the river, Moore and Kreizler view the horribly mutilated body of a young male prostitute from one of Manhattan's infamous brothels. Supervised by the police commissioner, the newsman and his "alienist" mentor embark on a revolutionary attempt to identify the killer by assembling his psychological profile. Their dangerous quest takes them into the tortured past and twisted mind of a murderer who has killed before...and will kill again.

What listeners say about The Alienist

Why oh why didn't i see this was abridged? I HATE abridged books. They are so cobbled together and hopelessly unsatisfying. So annoyed with myself. Who on earth actually prefers an abridged book to a real book, anyway???

Great listen. Unfortunately it is abridged.

I really enjoyed the book. I really wish that it was not abridged. The story was too condensed for me. I wanted to luxuriate in the prose.

Abridged versions of novels are horrible!

The reader is fine but this abridged vesrsion is no good, plese put up a full version!

Good as far as it went

Would you listen to The Alienist again? Why?

No. A good enough story, but not sufficient for a second listen.

The TV Series was better

The first time where the TV series is better written than the book, abominable adaptation, never again will I purchase an abridge book...

The Alienist by Caleb Carr

The Alienist by Caleb Carr revolves around a wealthy crime reporter for the New York Times in 1899 and his search for a savage murderer. Teamed with a renowned psychiatrist (in those days called an "alienist"), the pair uses psychological theory with deductive reasoning to tract the serial killer who preys on poverty-stricken young boys, victimized by powerful forces--club and hotel owners who control the city's dark world of prostitution.

Although not one of my favorite crime reads, the novel does give a sense of New York during the Victorian era with its presence of governmental corruption. It also highlights the gradual acceptance of criminal profiling as a vital police tool.

Fairly raw murder descriptions, but accurate historical detail, thanks to Mr. Carr's historical background. Plot gets you engaged, and you like the main character despite his faults. Good mystery!

In the sordid underworld of child prostitution in late 19th-century New York, a psychotic killer is hunting and killing on the rooftops of the city, and his victims are immigrant children. This seamless abridgment makes for a fast-paced mystery populated by period characters, including the real Theodore Roosevelt as police commissioner, and read by the incomparable Edward Herrmann.

This book was excellent, and I can't wait to venture into the next esposide of the Narrative book.

One of the best period suspense/detective stories.

What made the experience of listening to The Alienist the most enjoyable?

Its a long story that builds but characters keep the story going.

What does Edward Herrmann bring to the story that you wouldn’t experience if you just read the book?

Since he's been in many period movies his narration fits easily.

An excellent read that's quick and we'll casted. Highly recommend this for commutes or trips.

An old fashioned detective mystery that is well written and engrossing. The story transports you straight back in time, giving a truly atmospheric feeling. I loved the characters who are well rounded. Can't wait to read the next one.

I’m not sure why there is only an abridged version of this book when the full length version of the sequel is available. This version trims so much out it is impossible to get to know the characters properly and although the basic plot is there it all happens too fast and it’s hard to care. Please Audible - make a full length one!

This book is very well written, it has some beautiful ways of expressing situation. It made me feel sad, happy and extremely interested in the story. I loved listening to every minute of it. Edward Herrmann read the book so well I am going to search for more of his work.
If you like a good murder mystery that involves elements of mental health this is a sure read. The only problem is it was over to soon.

This was an amazing story! Caleb Carr wrote a great story and the much missed Edward Herrmann was the best possible narrator.

Held my attention from start to finish. Fabulous read, amazing imaginative story. Much sympathy for characters.

Detailed and dark
Having watched the series this gave a less personal feel than on TV, more focused on the more than the individuals.
Highly recommend

Enjoyed the TV adaptation and loved the book

I really enjoyed the TV adaptation so I thought I'd give the book a go and wasn't disappointed. The book is different enough to the series to be interesting whilst giving a different take on some of the characters. The narrator did a good job of giving different characters voices and accents.