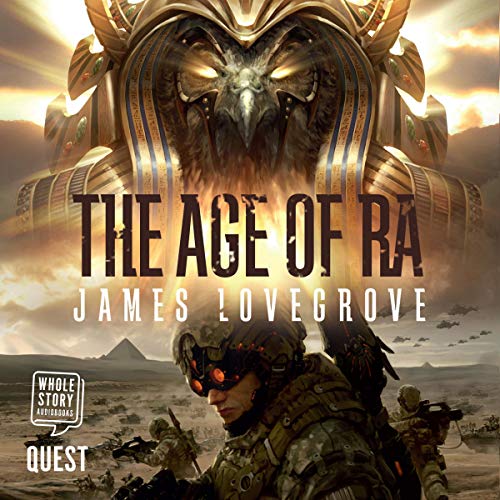 The Age of Ra

The Ancient Egyptian gods have defeated all the other pantheons and claimed dominion over the earth, dividing it into warring factions. Lt. David Westwynter, a British soldier, stumbles into Freegypt, the only place to have remained independent of the gods’ influence. There, he encounters the followers of a humanist leader known as the Lightbringer, who has vowed to rid mankind of the shackles of divine oppression. As the world heads towards an apocalyptic battle, there is far more to this freedom fighter than it seems.

"Pick up James Lovegrove's latest novel and you can rest assured that you are in the safe hands of a master craftsman." (SFX Magazine)

"One of the most interesting and adventurous British SF writers...." (The Bookseller)

What listeners say about The Age of Ra

the writing is pretty bad...also the plot...also the narrator has a much too friendly Midlands accent for a military sci-fi. Overall, maybe hold off on this one and see if things improve in the later books.

Some interesting ideas. A little disappointing to me. I will read some of the other Pantheon books to see if they are better.

An interesting take on an alternate reality where the Egyptian gods hold sway. And humans often find themselves pawns in the gods Machinations.