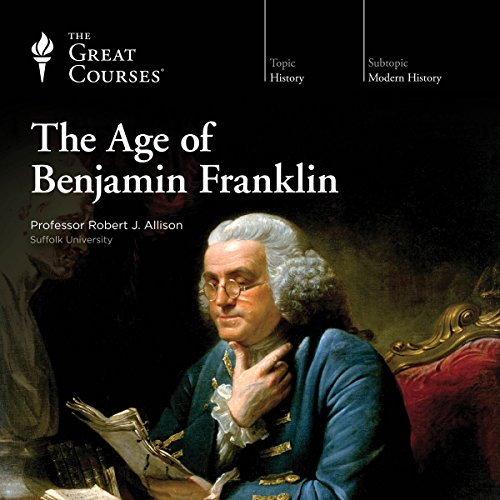 The Age of Benjamin Franklin

We all have certain images of Ben Franklin: the witty Founding Father who promoted independence; the Philadelphia printer who created Poor Richard's Almanack; the scientist who conducted experiments with kites in electrical storms; the author of what is arguably America's best-known autobiography. These images reveal an intellectually curious and successful man of the 18th century, but they don't fully capture the full spirit of one of the most extraordinary Americans - perhaps the quintessential American.

Why is Benjamin Franklin so compelling? What made him so successful in his day? And why has he continued to influence generations of Americans? Tackle these questions and more in The Age of Benjamin Franklin, a thorough - and sometimes surprising - course that presents a full portrait of a personality that defies easy definition. Taught by Professor Robert J. Allison of Suffolk University, these 24 insightful lectures explore the many facets of Franklin's life and times. From his humble beginnings as the son of a Boston soap maker to a world-renowned diplomat, you'll explore the many sides of this complex man, who somehow found time to:

Amid all that, Franklin traveled the world, helped draft the Declaration of Independence, negotiated for support during the war and peace after, served in Congress, and helped establish American government. He was a busy, busy man: ambitious, worldly, imaginative, and forward thinking, representing the best output from the Age of Enlightenment.

What listeners say about The Age of Benjamin Franklin

I loved the way this book was delivered. Not only was it interesting, but it was really an enjoyable listen! Lived it.

A fascinating portrait of a fascinating man! I could listen to this professor for hours. I highly recommend!

A disappointment for Great Courses. Wandering and repetitive. Of the seven Great courses books I have read so far, this is the first one that disappoints.

One of the best on Ben Franklin - Must Read!

I loved the way Professor Robert J. Allison arranged the content of this course! Too often historical lectures follow a 'time line' perspective which can be dry. Prof. Allison chose to approach this amazing man's life in a very different way that sequentially built upon his widely varied areas of genius. This is a course to go back to again and again and enjoy!

The lecture series sounds like it was presented by a professor which in fact it was. One thing of note it does not follow Franklin’s life chronologically but rather by topics. My main annoyance with the professor is his repeated phrase that we will talk more about this later. Why bring it up if we’re gonna talk about it later? This word does appear to be more accurate than Benjamin Franklin‘s own autobiography I found it overall to be enjoyable and very informative

An exceptionally well done examination of the American founding father, Benjamin Franklin. Each lecture illuminates one specific feature of Franklin's character and provides an understandable image of the complex man. Some studies of famous personalities are simply overwhelming, but this easy to follow course does an excellent job of presenting Franklin as a remarkable man of the times.

Really great presentation of the complexities of Benjamin Franklin

These course is broken into about thirty minute sections and really brings to life a very complex interesting American hero. It is well done in that Professor Allison dives into they many layers that made Franklin and never puts rose colored glasses on some of the more controversial parts of his life, like being an owner of enslaved people. Allison also touches on his involved relationship with his son William.

i thought the narrator brought it really well, and to me the narrator makes or breaks the story in audiobooks.

I have always been fascinated by Franklin and wanted to learn more. Being more conservative minded I was nervous about what kind of spin I would get. I found this to be strictly on the topic and, at least for me, a very enjoyable listen. It is like sitting in a classroom, but I didn’t mind at all. Very good job, definitely worth a listen!

I suppose it would be different if you were in a classroom setting, but the narration has adds no life to a man who had a tremendous amount of it. Had to return it 1 chapter in.