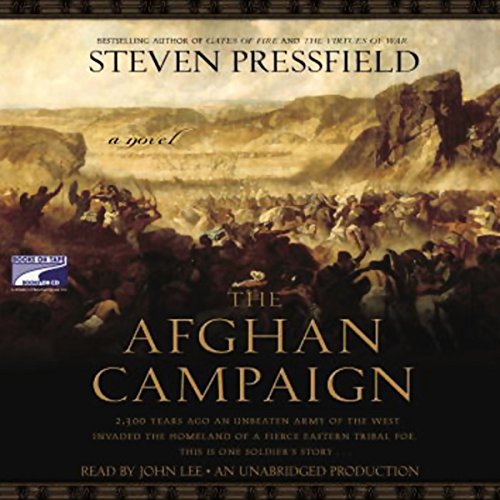 In words that might have been ripped from today's combat dispatches, Steven Pressfield, the best-selling novelist of ancient warfare, returns with a riveting historical novel that re-creates Alexander the Great's invasion of the Afghan kingdoms in 330 B.C., a campaign that eerily foreshadows the tactics, terrors, and frustrations of contemporary conflicts in Iraq and Afghanistan.

Narrated by Matthias, a young infantryman in Alexander's army, The Afghan Campaign explores the challenges, both military and moral, that Alexander and his soldiers face as they embark on a new type of war and are forced to adapt to the methods of a ruthless foe that employs terror and insurgent tactics, conceals itself among the civilian populace, and recruits women and boys as combatants.

Matthias joins Alexander's army after it has conquered the Persian empire and is advancing east into Afghanistan on its way to the riches of India. Part of a unit that includes recruits his own age as well as veterans, Matthias chronicles his rapid coming-of-age as a soldier as he enacts Alexander's scorch-and-burn strategies, experiences the joys and sorrows of a romance with an Afghan girl, and faces the barbarism of the Afghans, his fellow soldiers, and ultimately himself. As Matthias relates the brutal day-to-day encounters between the two sides, he exposes the human cost borne by a company of men whose code is humanist and secular when they seek to impose their will on a people of deep religiosity, insularity, unbending pride, and a passionate readiness to die for their cause.

An edge-of-your-seat adventure that brings to life the confrontation between an invading Western army and fierce Eastern warriors determined at all costs to defend their homeland, The Afghan Campaign once again demonstrates Steven Pressfield's profound understanding of the hopes and desperation of men in battle and of the historical realities that continue to influence our world.

"Pressfield's battlefield scenes rank with the most convincing ever written: you can almost feel the slash of sword on skin and sense the shattering mix of panic, bravery, blood lust, and despair." (USA Today)

What listeners say about The Afghan Campaign

Pressfield does a great job with this story. The story about Alexander's conquest of Afghanistan is brought to life with excellent writing about the charcaters and their plights. The obvious crossover with today's Afghanistan is a little overdone in the beginning but the storyline settled down and "forced" character quotes with apparent meaning regarding today's Afghanistan fade away as the book progresses. The characters are so well-defined and believeable you will find yourself chilled by the adventures in the mountains of Afghanistan.

I love Pressfield's writing style and this is another terific story of his. I still think Gates of Fire is his best work, though. It is a pity that Gates of Fire is not on audible. I have the original cassette tapes.

I read The Afghan Campaign back in 2007 and still, to this day, is my favourite book. Though the audio book leaves out a few things here and there I still found it enjoyable and would recommend it to anyone interested in the subject, as it is eerily applicable to the experiences of the British, Soviets and now the United States.

Some care in casting narrators would be appreciated.

The cultured voice of a metrosexual academic is hardly fitting for a soldier’s story. Otherwise it’s classic Pressfield.

A Sense of What it May Have Been Like

Classical Pressfield combining a great story with an interesting era of history in a region that we are now all too familar with. The story flows well. Surprisingly, or perhaps one shouldn't be, the names of the places from that era are still in the news today.

The Afghan Campaign is Wonderful, but

The Afghan Campaign is a wonderful book but the narrator skips paragraphs in the book. This drives me crazy so I returned to just reading the book.

It's an interesting piece of historical fiction. Makes you really appreciate the diverging moral code of the Middle East.

well worth the time and seems historically correct. great narration flowed well and kept you involved

Worst book I have read in at least a decade (and I read a lot). Imagine being told how one of Alexander the Great's soldiers walks around an Afghan town worrying: "In twenty MINUTES (!!) the OFFICE (!!) will be closed".