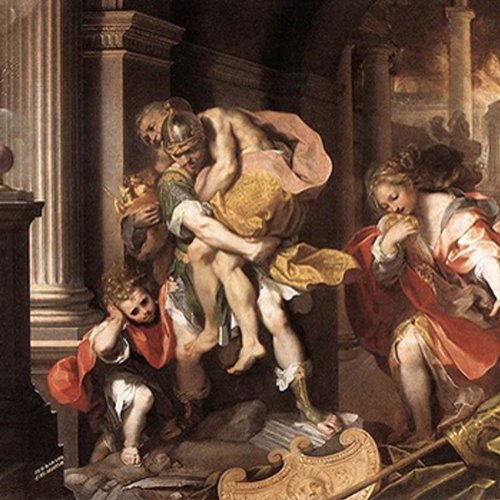 After a century of civil strife in Rome and Italy, the poet Virgil wrote The Aeneid to honor the emperor Augustus by praising Aeneas, Augustus's legendary ancestor. As a patriotic epic imitating Homer, The Aeneid also set out to provide Rome with a literature equal to that of Greece.

It tells of Aeneas, survivor of the sack of Troy, and of his seven-year journey: to Carthage, where he fell tragically in love with Queen Dido; to the underworld, in the company of the Sibyl of Cumae; and, finally, to Italy, where he founded Rome. It is a story of defeat and exile, and of love and war.

Virgil's Aeneid is as eternal as Rome itself, a sweeping epic of arms and heroism - the searching portrait of a man caught between love and duty, human feeling, and the force of fate. Filled with drama, passion, and the universal pathos that only a masterpiece can express. The Aeneid is a book for all the time and all people. This version of The Aeneid is the classic translation by John Dryden.

What listeners say about The Aeneid

Sometimes when you read a classic, especially a classic in translation, it's hard to tell exactly why it's a classic. That isn't a problem here. The ghost of Virgil was hovering over Dryden when he rendered this epic in rhymed couplets. And the ghost of Dryden hovered over Michael Page when he delivered his vigorous narration.

I found myself rewinding many times to relisten to Dryden's classics lines and metaphors. Michael Page reads like a Shakespearean actor.

The Roman Odyssey and foundation story

Virigil's epic written to solidify the Roman identity and origin story. Prose is always a little difficult to follow at times, but the narrator does a decent job of it, not great but decent. Anyone interested in Greco-Roman history should probably read it.