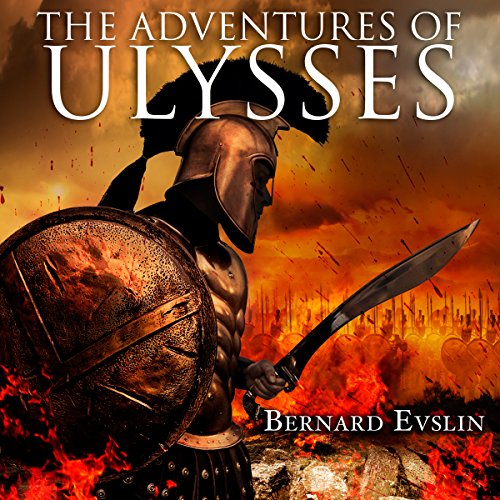 The Adventures of Ulysses

For years, the Greeks have lain siege to the walls of Troy, the final act in the greatest war the ancient world has ever seen. Rivers of blood have been shed in the fight, but it takes one man to end the conflict: the brilliant strategist Ulysses, who defeats the Trojans with a simple trick - a wooden horse with an army inside. Victorious, Ulysses and his men prepare to make the long trip home to Ithaca. It will be an odyssey to remember.

At every step, Ulysses' path is blocked by warriors, monsters, and the gods. He battles a Cyclops, a sorceress, and worse, but this valiant leader never falters. For beyond the seas lies his beloved wife, and he will not rest until he is by her side once more.

Sequel to the 2015 Audie Award-nominated title Heroes, Gods and Monsters of the Greek Myths, one of the best-selling mythology books of all time.

What listeners say about The Adventures of Ulysses

the best story telling I have ever heard

Perhaps it's to soon , the images have yet to leave my imagination. Marvelous storytelling! I have heard many master storytellers, but NONE finer than this. I shall give the highest compliment I can, I Shall pass this to my children.

Beautifully written. Takes you back home to a time long past, but with the human conditions of today.

I honestly enjoy this narrator from start to finish, greatly done, please do the Illiad.

A great summary of Ulysses.

I listened to Circe and The Song of Achilles by by Madeline Miller. Although shorter, I would recommend this book as well. The connection between the stories is entertaining and the development of their characters add to the overall tale of The Odyssey which I also listened to. As with any audiobook, the reader is crucial. Todd Haberkorn’s voice is perfect and his performance is excellent.

Wonderful reading of a classic, made new!

The narrator spins a captivating story, full of parts we may know of, and many I had not heard of before. He tells the tale of Ulysses (or Odysseus) and all the islands he stops at on his adventures. It's a fantastic story, told excellently. If you like mythology stories, it's worth it! We also bought the Greek Mythology stories Todd Haberkorn also narrated (also great).

Written as if the muses sat with him

the retelling was one of or even the greatest I ever read. listening to this was like how the story was meant to be. fleshed out and brought to life for those the telling was meant for. In both an ancient Greece and Rome stories changed and shifted for each telling and for each group. Through the audiobook, it went back to it's roots. I have read Iliad and Odyessy since I was a child and always cherished it, but it always amazes me to listen to it.

if you're a fan of adventure, Greek mythology, or old stories explaining natural phenomenans and powerful gods/goddesses this book is an amazing tale full of just that, time is something unknown while hooked listening to this great novel great reader too if you listen to it

The Adventures of the Great Ulysses

I love this story. The narrator makes it even better!! The way he tells the story gives such a great ability to bring the visions to life in your mind!

my son and I enjoyed this book

Great listen. Adventure and lore. My son and I enjoyed the action and twists and turns.

The subject of Homer's epic poem with all the pieces put together in chunks and read beautifully.

Not nearly as good as Evslin's The Greek Gods.

This was a bit of a slog. Decentish captain who gets boastful and screws over his crew. Crew are stupid and deserve to die. Long slog of a story through to a decent ending. Voices and such were very good. Greek Gods are petty and childish as ever.

Absolutely loved it. A great story, written and narrated in a very captivating way. Have a go at it.