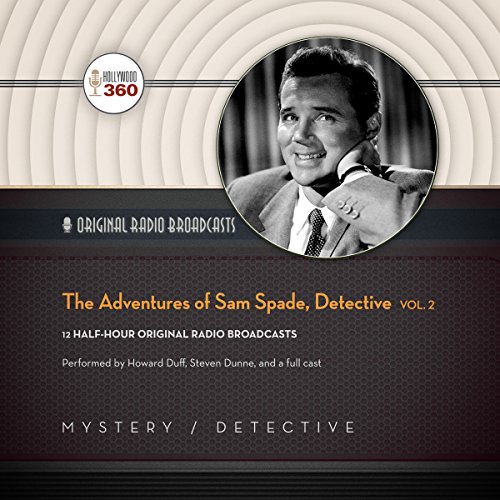 Sam Spade was a hard-boiled detective with cold detachment, a keen eye for detail, and unflinching determination to achieve his own justice. The character of Sam Spade was created by writer Dashiell Hammett in 1930 for his crime story The Maltese Falcon, and for most people, the character is closely associated with actor Humphrey Bogart, who played Sam Spade in the third and most famous film version of the story.

In 1946, William Spier, one of radio's top producers, brought Sam Spade to the airwaves starring newcomer Howard Duff with Lurene Tuttle (and occasionally Sandra Gould) as Effie Perrine, Spade's secretary. Duff took a more tongue-in-cheek approach to the character than did the novel or movie. Dashiell Hammett lent his name to the radio series, but did little more than cash the checks sent to him for the privilege.

Scriptwriters were Jason James and Bob Tallman, who received an Edgar Award in 1947 for best radio drama from the Mystery Writers of America. Howard Duff starred as Spade until 1951 when Steve Dunne took the role. Starring here are Howard Duff or Steve Dunne as Sam Spade, with Lurene Tuttle, Paul Frees, Wally Maher, Verna Felton, Shirley Mitchell, Lou Merrill, and others.

What listeners say about The Adventures of Sam Spade, Detective, Volume 2

How can anyone resist the great good fun of Howard Duff and the remarkable Lurene Tuttle, who plays all the female roles on the show. Always worth it.