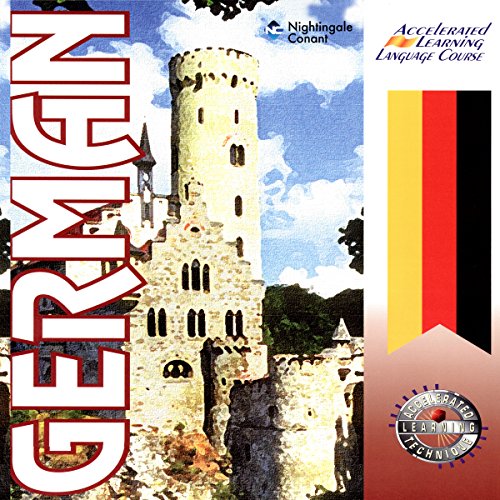 Now, make German your second language as completely, as quickly, and as easily as English became your first. You can by using the revolutionary Accelerated Learning Techniques, hailed around the world as the very best way to learn complicated material - fast! Haven't you always wanted to have a command of German? To reap the benefits professionally that come with fluency in another language? To feel comfortable in top restaurants? To travel with confidence and a whole new outlook? German Accelerated Learning Language Course from Accelerated Learning Systems, Ltd., is the proven, practical, fun way to pick up one of the world's most beautiful and useful languages. Based on Nobel Prize-winning research, this program is effective, yet non-threatening, and it teaches you German with a system of total involvement and maximum pleasure. Listen as, quicker than you ever dreamed possible, you learn how to:

Hundreds of companies and thousands of organizations have taken advantage of the German Accelerated Learning Language Course. And now the time has come for you to do so too. Get ready to enjoy a wonderful, life-changing sense of achievement.

What listeners say about The Accelerated Learning German System

Where does The Accelerated Learning German System rank among all the audiobooks you’ve listened to so far?
The entire course, as are other language courses, are designed to teach you some degree of proficiency in the language. After purchasing this course, I couldn't find a link to the download for its associated course book, not that I looked hard. In my library, I still can't see a link to the pdf. Within the next week after purchase, I received two emails from Audible (AU - Australia) containing links to the associated course work book. So if you can't a pdf link or see those emails with a pdf link, I suggest contacting audible support.

If you wish to succeed at learning some German, you will have to listen to the audio, and then study the coursework. Before the first episode, before any German, it is all about your motivation, getting into the right frame of mind, including a deadline for completing the course. Unless you have a perfect memory, you will have to persevere to get many benefits, and replay each episode. And as the instructor mentions, you do not have to get each episode perfect before continuing - there are repetitions of common words which will want to be learned within the same and later episodes.

If you’ve listened to books by Colin Rose before, how does this one compare?
I haven't listened to other Colin Rose language or other Colin Rose accelerated learning courses prior to this work, though have studied other languages and even a little German beforehand. I believe the coursebook should start to be read _after_ you listen to the audio presentation. And to learn, the instructor then refers to having breaks, to the coursebook for exercises, and visual learning via the 'memory map'. The memory map is series of pictures relating the German words to the story elements (what is happening in the story) so that if you use visual learning you also get benefit from this. The narrators speak in the English of the United Kingdom.

Which character – as performed by the narrators – was your favourite?
There are a series of 12 episodes containing several scenes. In each of the episodes the setting is made clear (in English). Then the dialogue of mostly concerning Peter Wilson (from England) and Hilda Holtz (from Hannover) starts. The scene is repeated multiple times. First speaking - Entirely in German. Second speaking - Entirely in German with classical music. Third speaking - with English first, then the German words. The explanation for the music in the second repetition is that you involve both the left and right hemispheres of the brain in the learning process. The music in the 2nd repetition does make an extra level of distortion in the actors voices, so you hear them and have to think about what has been said. In any case when listening to the repetitions which included the music I didn't feel as tired as I had when listening to any foreign languages for a "length of time". After the repetitions, then there are exercises, including time for speaking, which focus on vocabulary building, and not on German grammar. The approach is to put grammar to the background, and explain bits of grammar after you have heard several examples of speakers using the language. There are examples of German grammar put into rhyme to help remember principles of the grammar. More explanation might be helpful, although the text is about you thinking about what you have heard in the language to have it make sense to the person undertaking the course.

Did you have an emotional reaction to this book? Did it make you laugh or cry?
Not having bothered to read the coursebook before I started, I was pleased it started in German with little English explanation. This will be daunting to someone without prior German learning, but others with other learning experience, will recognise this as an immersion experience, and helps you to start thinking about what that words you don't recognise might mean, given the context of the situation. This will help in the context of having to use German (or any other language). For someone new to the language, only on the second time through, after having revised the coursework, will many more of those spoken words make sense.

Any additional comments?
Even being an old course - West and East Germany, deutschemarks rather than euros, the course still holds valuable dialogue for everyday situations. The exercises should really be done with the coursebook open to make sense. The coursebook also contains a (fairly long) section on mapping a significant portion of German words to English words based on changed letter(s), which when first reading (and eventually listening) help to understand the similarities and background within the language to help learning. This is listed as an optional extra, and only if you wish to make a game of it. The book recommends approaching the exercises as games, to get in the right frame of mind. Unfortunately for the coursebook, although it is searchable, it is scanned from a printed version, so the text is NOT as clear as it could be (look carefully to see if that is an i or a l), nor does it have a handy index to chapters, so it was necessary to start bookmarking chapters, etc in the coursebook. Best wishes to others in finding your motivation and setting aside the time for both listening to the audio portion and studying the coursework. A little each day is better than a block of time once a week (as is mentioned in the course itself). I'm willing to try to another of his courses if interested in reviewing or learning another language.

This course needs a pdf book

I like the integrated music. Since a link to the pdf booklet is missing I cannot recommend this course very highly.

Did The Accelerated Learning German System inspire you to do anything?

There are deficient materials. Where is the pdf?

If I had bought this course before Nightingale Conant contracted with Audible I would of received a booklet of translated German. In addition to 12 CD's. Where is the link for the pdf file for this course?

Would you try another book from Colin Rose and/or the narrators?

What would have made The Accelerated Learning German System better?

In the publisher description, it should say you need an actual textbook to follow along the audio.

What was most disappointing about Colin Rose’s story?

No mention anywhere in audible that a textbook is required.

I have only just purchased the course but I had the original French Accelerated Learning course. People have asked about the accompanying book / pdf. It is available but you need to be in the desktop site. Click on library twice from the menu at the top and you will see a link 'view pdf". Click on this and it will download the book. I hope this helps.