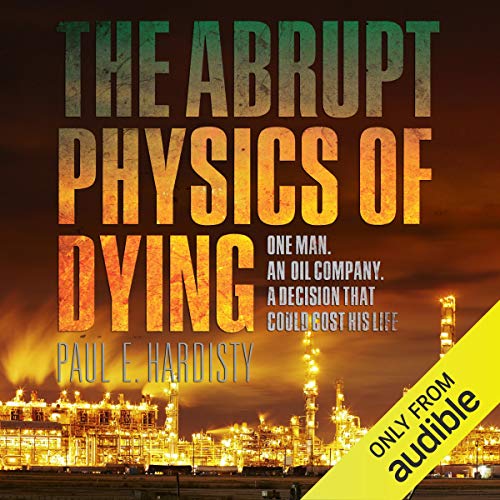 The Abrupt Physics of Dying

Claymore Straker is trying to forget a violent past. Working as an oil company engineer in the wilds of Yemen, he is hijacked at gunpoint by Islamic terrorists. Clay has a choice: help uncover the cause of a mysterious sickness afflicting the village of Al Urush, close to the company's oil-processing facility, or watch Abdulkader, his driver and close friend, die. As the country descends into civil war and village children start dying, Clay finds himself caught up in a ruthless struggle between opposing armies, controllers of the country's oil wealth, Yemen's shadowy secret service, and rival terrorist factions. As Clay scrambles to keep his friend alive, he meets Rania, a troubled journalist. Together they try to uncover the truth about Al Urush. But nothing in this ancient, unforgiving place is as it seems.

Accused of a murder he did not commit, put on the CIA's most-wanted list, Clay must come to terms with his past and confront the powerful forces that want him dead. A stunning debut ecothriller, The Abrupt Physics of Dying is largely based on true events.

Gritty, gripping and shocking, this book will not only open your eyes but keep them glued to the page until the final, stunning denouement is reached.

Paul is a writer, chartered environmental engineer, university professor, and triathlete. He lives in Perth, Western Australia, with his wife, Heidi; and sons, Zachary and Declan. His first novel, The Abrupt Physics of Dying, has just been published by Orenda Books. It is a story of greed, corruption, and the power of redemption.

"Just occasionally, a book comes along to restore your faith in a genre and Paul Hardisty's The Abrupt Physics of Dying does this in spades. So if you re terminally bored with perm two from the UK, US, Russia, China or Israel and then find a maverick and feisty gal to save the world in 400 pages, this stunning debut from both the author and new indie publisher Orenda Books is for you." (Crime Review)
"This is a remarkably well-written, sophisticated novel in which the people and places, as well as frequent scenes of violent action, all come alive on the page.... This is a really excellent debut." (Literary Review)

What listeners say about The Abrupt Physics of Dying

Every thriller promises edge of seat tension but very few actually deliver. The Abrupt Physics of Dying does! If this does not get your heart beating on overtime then nothing will! Gritty, gripping and heart stoppingly tense until conclusion I was nothing short of mesmerised. Set in Yemen and with a wonderful sense of place this is a hugely timely novel which deserves to attract even non-thriller fans. With some thoroughly thought-provoking moments I was blown away. Highly recommended.

I was expecting violence to feature throughout this book and although it is present it was not gratuitous at all. The action is all implicit to the storyline and never overplayed. With a wonderful narrator and an incredibly considered retelling of events this makes for an incredible listening experience.

What was one of the most memorable moments of The Abrupt Physics of Dying?

With so many twists and turns it would be hard to pick out just one memorable moment largely because I became so emotionally involved with the story. I had a true sense of appreciation of the situation that Clay found himself in and my empathy with the local population was all-consuming.

Peter Noble is an outstanding narrator with real depth of emotion in his voice evident throughout. That the novel is largely based on true events could be part of the reason for this. Noble cranks up the tension well and brought the story of Claymore Straker off the page and alive.

The narration is an essential part of the audiobook experience and Peter Noble will go on my list of narrators to look for again.

I really wished I could have fitted listening into one session which is a definite thumbs up. With vivid descriptions and an excellent portrayal of the bribery, corruption and assuaging of data that goes on within global energy corporations, I couldn't put this down or be separated from my headphones easily!

Powerfully moving and intelligently written The Abrupt Physics of Dying will blow you away!

A very promising and time relevant thriller about oil in Yemen ruined by a cliché and poor love story shoe horned in that kills the story dead. I gave up halfway through.