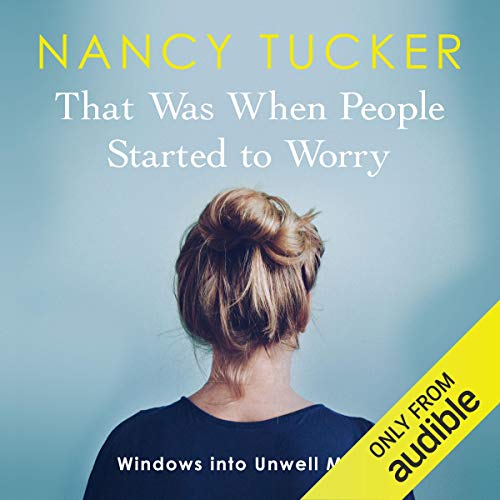 That Was When People Started to Worry

‘In the waiting room, I see a lot of people who I could tell had real, serious Problems. They deserve to be here. I don’t. I’m a fraud. A lazy wreck seeking an excuse for her incompetence. I’m useless.’ (Abby, 24)

Having conducted over 100 hours of interviews with 60 British women aged 16-25, Nancy Tucker - the author of The Time In Between, an ‘astonishingly good’ (Sunday Times) memoir of a life consumed by eating disorders – explores what it’s like to suffer from serious mental illness as a young woman.

With raw honesty, sensitivity and humour, That Was When People Started to Worry examines real experiences of anxiety, self-harm, borderline personality disorder, OCD, binge eating disorder, PTSD and dissociative identity disorder. Giving a voice to those like Abby who can’t speak out themselves, Tucker presents a unique window into the day-to-day trials of living with an unwell mind.

What listeners say about That Was When People Started to Worry

This book should be required reading in everones education

This has been one of the best illustrations of the lived experiences of those living with mental illness. It is Broad enough without any assumed pschological knowlege as to be accessable to all who would take the time to pick the text up. But the depictions aren’t oversimplied either, they are well characterised, and vivid enough that you will come to feel you know each of these 7 characters personally, because you probably do. else you yourself my see yourself in these characters and feel some relief in the knowlege that these are real stories from real people, like you.

And you are not alone.

The narrator does a fantastic job of bringing the words to life and so i would absolutely recommend the audio book rendition if you can.

I have been asked by several curious strangers what book I was reading and each of them after hearing my muddled synopsis of rummaged about for a pen and paper and had me repeat the title and author, so they could jot them down and get themselves a copy too.

You should read this book, it will mke you a kinder and wiser person.

A must read for anyone who is struggling with mental health and think they are the only one. A great read for loved ones who struggle to understand the sometimes very unloveable behaviour we present.

EnidBlyton on acid - awful. This book made me sad.

The idea itself is fine(ish)...from real-person interviewing the author creates amalgam ‘representative’ stories of individual young women living with - sorry *suffering from* - specific mental health problems.
Its clear too from the intro the author is genuinely motivated to (re)present accurately & with meaning..

I dipped into four chapters, willing each to be less gauche & less silly in content & delivery than the one before but couldnt unfortunately, hear a single chapter out; I found this an unfortunate mixup of generalities, stereotypes and infinitely/unhelpfully middle class in orientation.

Error in description but a good book nontheless.

There is no DID (dissociative identity disorder) representation in this book, but other than that it was a wonderful read. Hopefully the blurb gets corrected.

What could have been a really good and interesting idea was completely ruined by the overly-dramatised depictions of each illness. The author, in an apparent attempt to humanize those with mental illness, goes too far in the other direction and makes each individual into caricatures. The stories themselves would have been completely believable and infinitely more interesting without this over-the-top approach.

The narrator for this was awful- terribly shrill and difficult to listen to, lending the whole affair a more "chick-lit" feel than was intended.