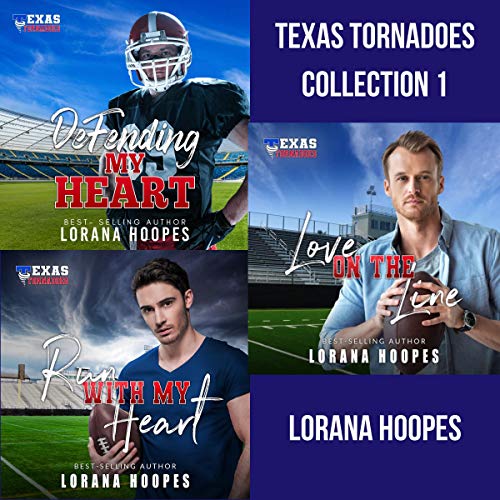 Defending My Heart - The man who broke her heart. The second chance she's not sure if she wants.

Emmitt Brown's demons are even bigger than he is, and as a defensive lineman for a pro-football team, that's something. When the team captain tasks his defensive line to go home for Christmas and get rid of their biggest past regret, Emmitt finds himself returning to the small town he grew up in to find the woman he never should have left. Too bad she hates him and tells him to go away.

Mia Carter can't believe Emmitt Brown is back in town. She does not need this right now. Especially since he's been the ghost who won't leave her conscience alone for the past five years and especially since she recently lost her husband. But when the pro football player steps up and offers to help her son fight cancer, she finds herself reluctantly agreeing.

Now, they have to make a choice: Dig into the past and let the truth bring them together, or lose the Christmas miracle right in front of them.

Another heart tugging, swoon worthy romance from best-selling author Lorana Hoopes. This first book in the Texas Tornadoes series will have you laughing, crying, and applauding at the grace of God. Grab your copy and prepare to see God shine today by clicking above.

Run with My Heart - A football player who's lost. A woman in danger of losing all she loves. Could he be the Christmas Miracle she's been praying for?

Pro football player Tucker Jackson has a chip on his shoulder. His mother died when he was young, his father threw himself into his work, and the team he now plays for is in danger of losing their season. His anger drives him to a bar where an ensuing fight earns him service at a community center. Can he find a way to tame his ire before it destroys his dreams forever?

Shelby Doll has a heart for kids, but the community center she runs is short on funds. Tucker Jackson is her last hope to keep the doors open, but will he leave her in a lurch when it matters the most?

Another eye opening, heart-warming romance from best-selling author Lorana Hoopes. This football spin off series will have you laughing, crying, and basking in the glow of Christmas no matter the season. Grab your copy and prepare to see God shine today by clicking above.

Love on the Line - A seemingly perfect quarterback. A designer with a celebrity crush. What happens when you stumble across something you were never supposed to find?

Blaine Hollis, quarterback of the Tornadoes, appears to have everything together, but no one knows the secret he's been hiding. He's enamored by Kenzi when he meets her at the center, so he lets her into his life - something he rarely does. But when she finds out his darkest secret, will he open his heart or turn her away?

Kenzi Lanham has long had a celebrity crush on Blaine Hollis, so when he asks her to redecorate his house, she is thrilled. Romantic sparks quickly fly between them, but when she finds an old clipping, he suddenly changes. Can she figure out what he's hiding before it tears them apart?

Another heart tugging, swoon worthy romance from best-selling author Lorana Hoopes. This book in the Texas Tornadoes series will have you laughing, crying, and applauding at the grace of God. Grab your copy and prepare to see God shine today by clicking above.