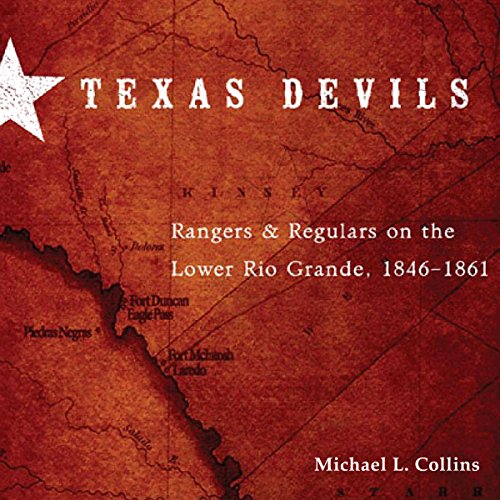 Reconsidering the myth of good guys in white hats.

The Texas Rangers have been the source of tall tales and the stuff of legend as well as a growing darker reputation. But the story of the Rangers along the Mexican border between Texas statehood and the onset of the Civil War has been largely overlooked - until now.

This engaging history pulls listeners back to a chaotic time along the lower Rio Grande in the mid-19th century. Texas Devils challenges the time-honored image of "good guys in white hats" to reveal the more complicated and sobering reality behind the Ranger Myth.

Michael L. Collins demonstrates that, rather than bringing peace to the region, the Texas Rangers contributed to the violence and were often brutal in their injustices against Spanish-speaking inhabitants, who dubbed them los diablos Tejanos - the Texas devils. Collins goes beyond other, more laudatory Ranger histories to focus on the origins of the legend, casting Ranger immortals such as John Coffee "Jack" Hays, Ben McCulloch, and John S. "Rip" Ford in a new and not always flattering light.

In revealing a barbaric code of conduct on the Rio Grande frontier, Collins shows that much of the Ranger Myth doesn't hold up to close historical scrutiny. Texas Devils offers exciting true stories of the Rangers for anyone captivated by their legend, even as it provides a corrective to that legend.

What listeners say about Texas Devils

Didn t want it to end. Wonderful how it went into the 1860s.

A Country in Itself

Interesting book on history of Texas, the Rangers and relationship with Mexico. The Rangers, while certainly competent, where almost as offensive as the bandits they pursued. I have to say that the listening becomes tedious at times, particularity when the author is describing the pre-Civil War machinations of Sam Huston to invade Mexico. It seems like the quotes and recitations from speeches from involved parties are endless as well as unnecessary to get the author's point across. There are other parts of the book that are similar, almost causing me to decide to stop listening to the book although the narration was fine.