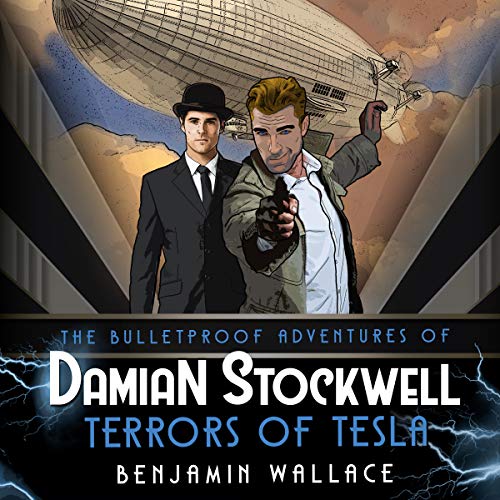 Damian Stockwell was raised from birth to be a force for good. Trained to combat the evils of the world and blessed with the physique of a demigod, he travels the globe on a quest to confront evil and punch it in the face. At his disposal is a vast fortune, an endless array of gadgets and an army of loyal allies.

On the eve of World War II, Stockwell's old friend, Nikola Tesla, delivers grave news. The plans to his greatest weapons have been stolen and the forces of evil intend to use them against America. His patriotism inflamed, Stockwell begins the hunt for the missing plans. If he's to save America, he'll have to punch his way through Nazis, ninjas, and the mad science of the master of lighting himself.

What listeners say about Terrors of Tesla

This is the second book in the The Bulletproof Adventures of Damian Stockwell Series. Like the first book, this story is action packed, intriguing and really hilarious. Damian is a really great character, so full of himself and so crazy! My favorite character is the valet, Bertrand! I loved to follow them in their journey. I enjoyed my listening. Again, Eric Bryan Moore did a stunning performance with all characters and accents. I received this free review copy audiobook at my request and I have voluntarily left this review.

yes to Damian, but Bertrand is still my fave

A great continuation to the series and the adventures of Damian with his trusted valet, Bertrand. This time we get to meet Tesla and he is such a prankster, playing tricks on Bertrand LOL Great plot filled with action, suspense and of course lots of LOL moments where I was shaking my head at the ridiculous situations they found themselves in, also with power-hungry nazis, ninjas, and mad science creating some really good twists.
Again, Mr. Moore did an outstanding job with his passion for his craft, the wide range of accents and really making the characters come alive. Bertrand is still my fave :D I hope he is narrating the next one in the series and will be out soon.

Benjamin has given us another fun adventure of Damian and his valet Bertand. There is never a dull moment with Damian in his adventures. Tesla was a brilliant inventor and the Nazis wanted what he had produced. Nothing would stand in their way, but they hadn't counted on Damian and Bertand getting on their trail. The narrator did an excellent job!

Great series...doing everything i wanted it to. Helped me kill some time. If you like this sort of thing go for it.